Electrocoagulation (EC) combines conventional treatment as coagulation and flotation with electrochemistry. The process destabilizes soluble organic pollutants and emulsified oils from aqueous media by introducing highly charged species that neutralize the electrostatic charges on particles and oil/emulsions droplets to facilitate agglomeration/coagulation (and the following separation from the aqueous phase). In comparison with conventional coagulation processes, the smallest charged particles have a greater probability of being coagulated because of the electric field that sets them in motion. Moreover, an “electrocogulated” flock tends to contain less bound water, is more shear resistant and is more readily filterable[1].

EC has been known since 1909 (Aluminium/ iron-based electrocoagulation patent by A.E. Dietrich)[2]. Is has been (most commonly) used in the oil & gas, construction, and mining industries to separate emulsified oil, petroleum hydrocarbons, suspended solids, heavy metals from effluents. Particularly in the Oil & Gas sector, the EC is fundamental to treat and reuse (on-site) the water needed for the drilling and fracking processes, minimizing the impact of injection wells. The application market has not yet exploded due to the high costs but changes in regulations and growth in the cited industrial sectors has recently brought electrocoagulation to the forefront[3].

Basically, the electrocoagulation apparatus consists of a sacrificial anode, producing coagulant metal ions, and a cathode made of metal plates (both submerged in the aqueous solution). The electrodes are usually made of cheap and non-toxic metals such as aluminium and iron. The dissolution (in mass), according to the Faraday’s law, is proportional to the applied current I and the treatment time ts.

Where z is the valence of ions of the electrode material, M is molar mass of the metal and F is Faraday’s constant (96485 C/mol). Coagulation is brought about by the reduction of the net surface charge; the colloidal particles (previously stabilized by electrostatic repulsion) can approach closely enough for Van Der Waals forces to aggregate. The reduction of the surface charge is a consequence of the decrease of the repulsive potential of the electrical double layer by the presence of an electrolyte having opposite charge (Fig. 1). 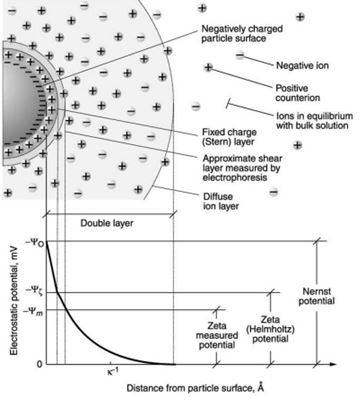 The classical representation of EC dissolution with the induced separation mechanisms (coagulation, flocculation and flotation) is reported in Fig. 2. The following main reactions take place during EC.

The metals and other contaminants, suspended solids and emulsified oils are entrained within the floc because of the neutralization of surface charges (destabilization). Destabilization also occurs by “sweep flocculation”, where impurities are trapped and removed in the amorphous hydroxide precipitate produced. Microbubbles (mainly of H2 and O2) adhere to agglomerates helping to separate and lift the flocs up to the surface. Depending on the application, the final solids separation step can be done using settling tanks, media filtration, ultrafiltration, and other methods. 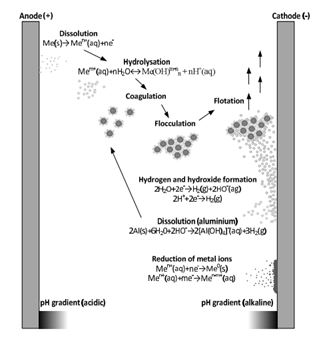 Fig.  2 –  Schematic representation of typical reactions during the EC treatment

Ferrous iron may be oxidized to Fe3+ by oxygen or anode oxidation and the formation of active chlorine species can enhance the performances of the EC. Both Fe and Al ions complexes with OH− ions. The formation of these complexes depends strongly on the pH of the solution, as shown in Fig. 3: above pH 9, Al(OH)4− and Fe(OH)4− are the dominant species. Anions, such as sulphate or fluoride, affect the composition of hydroxides because they can participate to side reactions and replace hydroxide ions in the precipitates. Temperature affects floc formation, reaction rates and conductivity. The pollutants’ concentration affects the removal efficiency because coagulation follows pseudo second or first-order kinetics. In fact, Ezechi et al., showed a second order kinetic of boron adsorption onto Fe(OH)3 in EC. This work reported a removal efficiency of almost 97% using iron plate electrode (inter-electrode distance of 0.5 cm, 15 mg/l concentration of boron in produced water, pH 7.84, current density of 12.5 mA/cm2) . 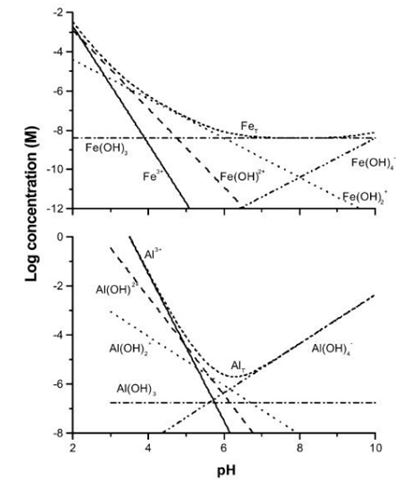 Fig.  3 – Concentrations of soluble monomeric hydrolysis products of Fe(III) and Al(III) at 25°C[5]

The literature reports many application of EC to water treatment & reuse. Among them, the treatment of oily waste water and produced water is relevant for the Oil & Gas sector. Produced water (PW) is the water trapped in the reservoir rock subsists under high pressures and temperatures and brought up along with oil or gas during production. Other components are the salts in relation to the source (seawater and groundwater) as well as dispersed hydrocarbons, dissolved hydrocarbons, dissolved gases (such as H2S and CO2), bacteria and other organisms, and dispersed solid particles. PW may also include chemical additives (corrosion inhibitors, oxygen scavengers, scale inhibitors, as emulsion breakers and clarifiers, flocculants and solvents) used in pre-treating, in drilling and generally in producing operations as well as in the downstream oil/water separation process. These chemicals affect the oil/water partition coefficient, toxicity, bioavailability, and biodegradability.[6]

PW is considered an industrial waste and its disposal to surface waters or its evaporation in ponds is subject to stringent environmental regulations.  It should be treated and reinjected for pressure maintenance, replacing aquifer water or should be reused for irrigation or as industrial process water. Many companies propose their own EC systems (Watertectonics, F&T Water Solutions, Bosque Systems, etc.) for the treatment of PW. The conference proceedings of IDA [7] gives some interesting examples of EC pretreatment for water reuse in the Oil and Gas Industry. A thypical process scheme, taken from a pilot plant presented in the conference7, is reported in Fig. 4. 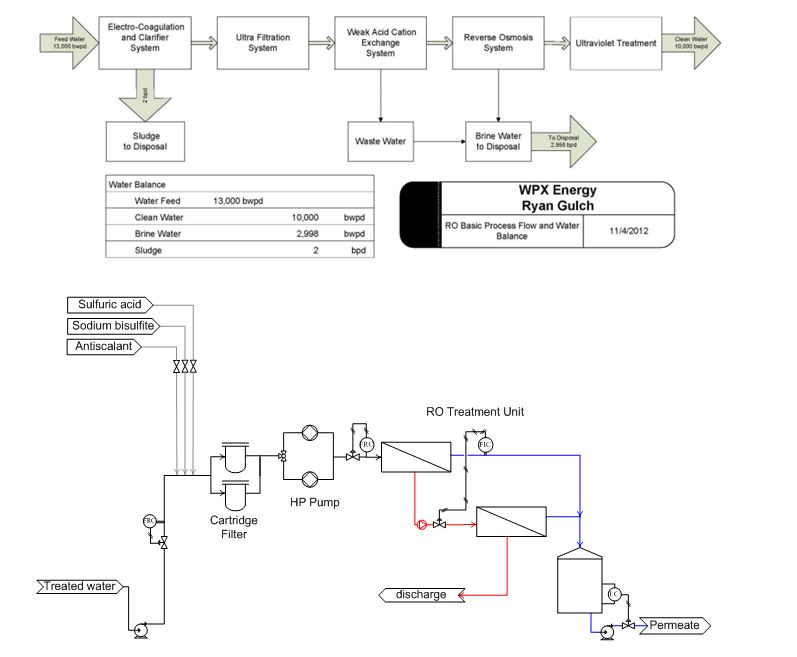 Eames reports the case study of the Oil Field in Colombia Meta Province is provided with EC/DAF/UF/RO for the wastewater reuse (3,000 BPD of water for Agricultural Irrigation and Surface; Irrigation (<60 ppm sodium) with the characteristics in Table below. Piemonte et al. also proposed the process analysis with energy and material balances of a produced water treatment train including Vibratory Shear Enhanced Processing (VSEP) membrane system (secondary treatment) and RO destined to the tertiary treatment to achieve the quality needed for water reuse[8].