Drilling Contractor Magazine, “Optimizing ROP through automation” based on  IADC/SPE “Increased Rate of Penetration Through Automation,”

Recently, rig equipment manufacturers and drilling contractors have developed automated  subprocesses of operational activities, which together can be described as rig automation.  Whereas mechanization provides operators with machinery to assist them with the muscular requirements of the work, automation decreases the dependency on human sensory and mental requirements as well.

This automation of surface activities is now increasingly being extended to address downhole conditions, optimizing the complete process through drilling automation.  Delivering drilling optimization through automation requires a comprehensive understanding of the subsurface and its interactions with the downhole drilling sys- tem cutting the rock, the drillstring delivering power from the rig, and the drilling ﬂuid system. Understanding and tackling these complexities with an intelligent automation system will deliver the next step—change in drilling optimization.

Schlumberger is introducing automation to its service offerings through the development of a family of manageable modules that can be used independently or in combination with the ultimate vision of a complete intelligent system that will have the capability to drill a hole section autonomously. The architecture to deliver this vision relies on a close partnership with the rig and drilling contractors to ensure that appropriate fail-safes are incorporated into the system. Included in this partnership — and central to the automation process — is the development of an integration system that intimately links surface machines on the rig with the downhole systems.

An automation console provides a contextual interface to all parts of the system and highlights automation recommendations. It is designed to maximize drillers’ situational awareness, which includes their perception of relevant elements of the drilling environment, comprehension of their meaning, and projection of their status in the near future. 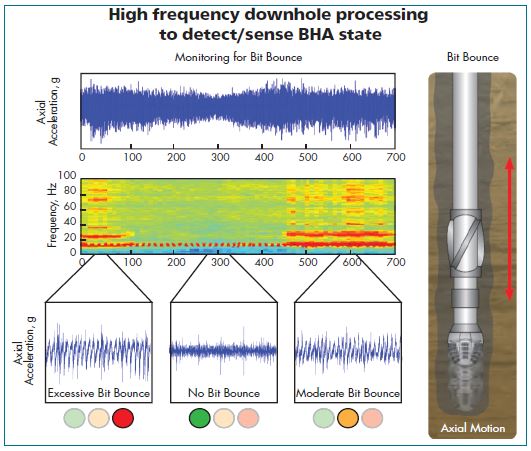 The schematic shows a flagging system for bit bounce. (Images courtesy of Schlumberger)

Drilling ROP optimizing software has already delivered measureable improvements over purely human decision-making. The algorithm is based on the modeled drilling response of a polycrystalline diamond compact bit and a unique signal processing technique that quickly and reliably detects changes in actual bottomhole bit response. Input data include real—time surface and downhole measurements and parameters of the top drive, drillpipe, mud, and bit. The algorithm computes revolutions per minute (rpm) and weight on bit (WOB) parameters that will deliver optimum ROP. Parameter recommendations are always kept within safe operating limits determined by the operator for the well being drilled. 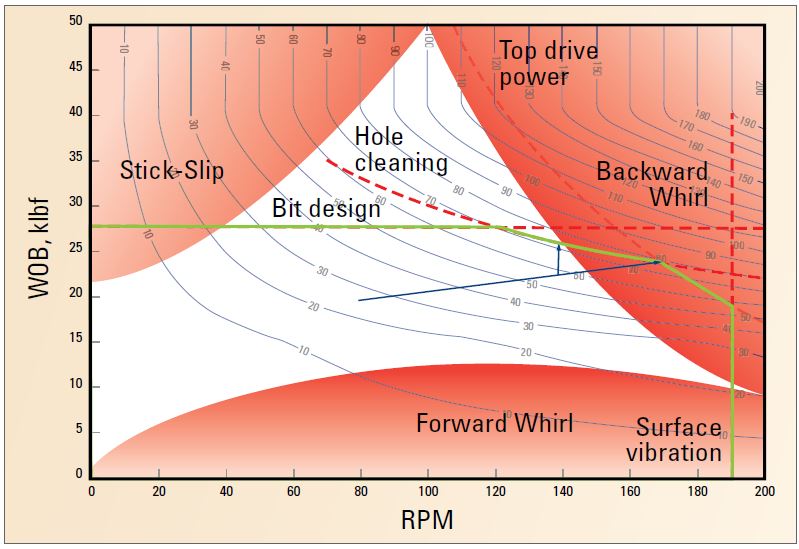 Figure shows contours of the ROP planed in the RPM/WOB plane. Constraints to the system are shown with red dashed ﬁnes. The safe operating envelope is shown in green. Regions where drill string vibration may occur are shown in red.(from Drilling Contractor Magazine)

The ROP optimizer can be conﬁgured to continually monitor and automatically control drilling parameters in a closed loop, feeding set points for WOB and RPM directly to the controls of the drilling rig equipment without the need for direct human intervention. In most applications to date, the software has been run in “advise mode,” whereby recommended changes to drilling parameters are made through human control.  In wells drilled with mud motors, the drilling optimization automatic control is only effective when the drillstring is turning — not when building angle in sliding mode. When used with rotary steerable systems (RSS), the software control is always active. The automated ROP system has been used to drill more than 100,000 m (330,000 ft) in the last 18 months, delivering an overall 40% improvement in ROP on average, including in ﬁelds where hundreds of wells had been drilled.

Continuous improvements in data transmission rates are enabling more downhole mechanical measurements than ever before to become available at higher frequency sampling. Coupling these high-frequency sensors with downhole intelligence provides the capability to fully characterize bottomhole assembly phenomena such as stick/slip, lateral vibration, and bit bounce, and condense this into actionable ﬂags and control signals for the automation system.  An automated surface rotation control system that automates and optimizes the oscillation of the drillpipe during slide drilling with a bent-housing motor has already delivered successful results. Systems that fully automate and optimize well trajectory control for both RSS and bent-housing motor assemblies are under development. The systems will allow directional drillers to focus on drilling optimization and leverage their expertise across more than one operation in a remote command center environment.  Safety and well integrity remain of utmost importance. Several related automated technologies are already being deployed and others are in development, along with systems to intelligently combine information to continually improve integrity.  Systems already delivering results include managed-pressure drilling (MPD), where bottomhole pressure is dynamically man- aged within the mud-weight window. MPD has enabled the successful drilling of wells with a narrow mud-weight window between pore pressure and fracture pressure where previous attempts had failed due to ﬂuid losses.

Auto sequencing provides the backbone for connecting sub- processes, system limits, and automation algorithms in a dynamic way. New signal processing methodologies create a level of awareness or understanding within the system so that steps are taken based on the drilling state and the well objective – not simply following a rigid sequence. This technology offers the potential for a higher level of autonomy in the process.

While drilling automation addresses processes at one rig site, many large development projects have several rigs working in an area with similar environments and the same technical challenges.  In high-volume, multirig campaigns, achieving the objectives of drilling optimization also requires optimizing the contribution from qualiﬁed human resources, best leveraging their expertise and experience. The factory drilling concept proposes a solution that achieves this objective, is highly efficient, and also addresses the frequent challenge of limited availability of reliable and experienced people to supervise operations.  A factory drilling cell houses an appropriate group of experts — typically a drilling supervisor, directional driller, and well engineer — handling multiple rigs. Cells are equipped to monitor real- time data from each rig, control operations on each one, and communicate directly with each rig to discuss ongoing activities with a designated person in charge on location.

The factory drilling approach is not suitable for all projects, particularly those with a high level of uncertainty and where sub- surface conditions are poorly understood. However, many development projects have repeatable well designs and predictable downhole conditions with limited downhole risk.  The factory drilling process leverages the power of drilling optimization software and also optimizes human expertise, reducing cost and HSE exposure related to having personnel on the rig — offering particular beneﬁts for operations in remote areas. Factory drilling requires close partnership between involved parties — including the drilling contractor, project manager, and operator — all working to aligned objectives. Operational responsibilities are not removed, but reallocated.

Advances in automating the drilling process will continue the trend toward improved and lower cost reservoir access, safely and consistently outperforming manual operations. Care will be taken to ensure the automation is designed around the human operator and not the other way around.  In all cases, the driller on the drill ﬂoor will continue to have complete control to engage or disengage from the automation system. Sharing expertise and resources through a factory drilling process will provide further economic beneﬁts in appropriate situations. Delivering effective and safe drilling automation will call for modified business models for the drilling industry. Long-term engagements and performance-based remuneration that aligns the operator, automation provider, and drilling contractor will facilitate and accelerate the establishment of drilling automation.