The first subsea technologies were developed in the 1970s for production at depths of a few hundred meters. Technology has advanced since then to enable production from deep water projects and the industry is constantly extending this reach using fixed platform, compliant tower, SPAR (acronym for Single Point Anchor Reservoir), FPSO ( Floading Production Storage Offloading). 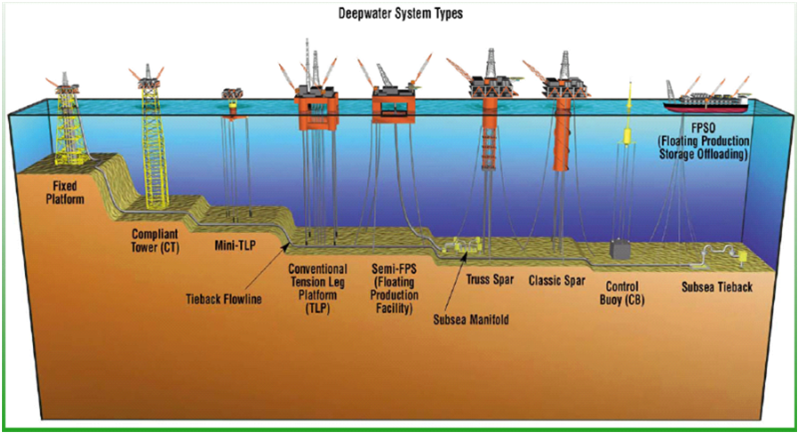 The traditional way to extract offshore reserves is via a fixed or floating production facility, with all the equipment needed (pumps, separators, water handling, compressors, processing and storage) located topside.

In deep or remote waters however, surface facilities are expensive and space is at a premium, making production from such locations challenging.

Subsea production system refers to the whole of equipment and structures that are located on or below or buried in the seafloor for the production of oil or gas from, or for the injection of fluids into, a field under an offshore production site, and includes: production risers, flow lines and associated production control systems.

The basic and essential function of a subsea production system is to control the production and transportation of fluids, providing a means to technically and economically produce remote and/or deepwater reserves by placing wellheads and associated mechanical and electrical infrastructure on the sea bed.

Production from subsea wells can be tied back to surface facilities or to shore.

In addition to reducing development and production costs (compared to a conventional platform), modularised subsea technology can also increase recovery factors by reducing backpressures on wells (e.g. via multiphase pumping or subsea separation).

Subsea technology is being rolled out in West Africa, Brazil and Asia as its field of application increases.

Since the beginning of the oil industry’s migration from dry land into shallow-water areas via wellhead platform solutions, and subsequently into deeper water depths of a few hundred meters, the development of reserves in greener areas and water depths down to more than 3000 metres has brought on significantly greater volumes of reserves.

The subsea industry is in a transition period where the advancements in technology are now taking major steps in the way of more advanced subsea systems being designed and installed.

Examples of this are the emergence of subsea processing units, which includes technologies capable of separating different fluid phases and boosting the fluids using pumps or compressors (subsea factory).

To show the rising importance of subsea production systems, the figure below illustrates the upstream expenditure growth for subsea vs rest of oil and gas industry at NCS (Norwegian Continebtal Shelf) – which is a pioneering area for the application of this technology.

The use of subsea plants allows small fields to be tied in to larger facilities and field centres.

The life of existing platforms and infrastructure is thus extended, and subsea technology will in such cases help get more resources out of the field areas.

Progress within subsea technology also opens for development in ultra-deep waters. In areas without any infrastructure subsea plants may be tied directly in to processing facilities onshore.

The production may be controlled from tied-in installations, or from land.

The facilities will normally not be affected by extreme weather conditions.
The use of subsea technology contributes to more environmentally friendly development projects and operations offshore.

Reduced ship and helicopter traffic in the operating phase helps cut emissions, at the same time as the use of remotely operated technology reduces the number of high-risk operations.

API RP 17A: Design and Operation of Subsea Production Systems—General Requirements and Recommendations – 2011