Geothermal energy is a clean, renewable resource that provides huge amount of energy whose development and production characterizes an existing and promising international market.

Heat flows through the crust of the Earth at an average rate of almost 59 mW/m² [1.9 x 10-2 Btu/h/ft²] and the earth’s natural heat reserves are immense. Ninety-nine per cent of planet Earth has a temperature in excess of 1,000 degrees Celsius as a result of residual heat inherited from the Earth’s primordial origins and the breakdown of radioactive materials.

Thermal energy in the earth is distributed between the constituent host rock and the natural fluid that is contained in its fractures and pores.

These fluids are mostly water with varying amounts of dissolved salts; typically, in their natural in situ state, they are present as a liquid phase but sometimes may consist of a saturated, liquid-vapor mixture or superheated steam vapor phase.

Fig.1 – Earth’s internal structure and temperatures in the earth

Local and regional geologic and tectonic phenomena play a major role in determining the location (depth and position) and quality (fluid chemistry and temperature) of a particular geothermal resource, but certain conditions must be met before claiming a viable geothermal resource:

Thermal energy is extracted from the reservoir by coupled transport processes (convective heat transfer in porous and/or fractured regions of rock and conduction through the rock itself).

The geothermal heat extraction process must be designed with the constraints imposed by prevailing in situ hydrologic, lithologic, and geologic conditions.

Typically, hot water or steam is produced and its energy is converted into a marketable product (electricity, process heat, or space heat) and any waste products is properly treated and safely disposed to complete the process.

Many aspects of geothermal heat extraction are similar to those one used by the oil, gas industries. Because of these similarities, equipment, techniques, and terminology have been borrowed or adapted for use in geothermal development, a fact that has, to some degree, accelerated the development of geothermal resources.

However, there are inherent differences that have limited development such as higher well-flow requirements and temperature limitations to drilling and logging operations

1.1 A Historical  Review of Geothermal Energy

The use of geothermal waters is a very ancient phenomenon probably dating back to the higher Paleolithic.

Nevertheless, its development from a more specifically health viewpoint originated in Japan and in Italy approximately 2000 years ago.

In Japan it was limited at national level, where Romans spread it from Italy to any region of their Empire (Hungary, Germany, France, Spain, Great Britain, Turkey and Arabia). 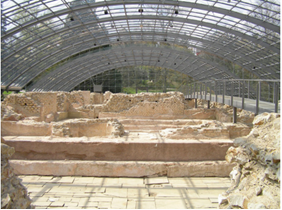 Fig.2 – Ruins of the Roman bathing facility at  Badenweiler in the Rhine rift valley (southern Germany)

From “History of Geothermal Energy Use” – Springer

The exploitation of the geothermal energy developed later and the first industrial plant to produce energy was built in Tuscany – Italy in 1827.

Francesco Larderel was the owner of a plant producing boric acid by extracting it from the water flowing underground in the area, he thought that instead of burning the woods of nearby forests to make the boric water evaporate, thus he decided to exploit the heat contained naturally in the water.

The idea was successful and, up to 1875, the chemical industry in Larderello was the most important in the world with reference to the boric products sector. It was in Larderello, in 1904, that the first lights powered by geothermal energy were lit, and in 1913 the first industrial plant for the production of electricity from geothermal sources was inaugurated, with a power of 250 kW. 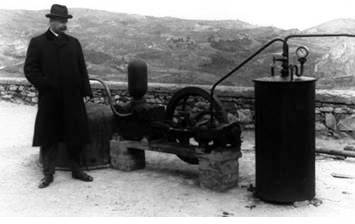 Fig.3 – Lardarello 1904: Prince Piero Ginori-Conti with his apparatus that converted geothermal to electrical energy for the first time in history. (From: UGI 2010)

Since then Italy has always been a leader in the production of geothermal electricity, and in time it has accumulated a unique experience on a global scale.

Currently, researches in geothermal energy exploitation are aimed to explore greater depths with the objective of finding supercritical fluids: a condition which can be reached when temperature is greater than 374°C and the pressure above 220 bars, the critical point.

Earth emits energy in the form of heat, which propagates from deeper ground towards the surface

The heat flow is due to two primary processes:

Due to the different thicknesses of the Earth’s crust and the different geological situations which can cause the rise of warmer materials from deeper zones, the geothermal gradient (i.e. the increase in temperature, due to greater depth) is not equal all over the earth.

With reference to the “plate tectonics” theory (according to which the earth’s crust can be divided into approximately 20 micro-areas called “plates” continuously interacting), the hottest geothermal areas of the globe are generally positioned along the breaking and collision margins of the plates.

The flow of heat is greater where the thickness of the lithosphere is less, as for example on the ocean ridges or in the continental rifting zones or in volcanic areas where different geological processes lead to rock melting, or in areas where there is slowly cooling magma in the subsoil.

The breaking of a plate causes long cracks on the earth’s crust, through which the magma reaches the surface (the Iceland Rift, The Red Sea/Rift Valley system, the Baikal Lake). Such regions might encompass several geothermal fields. 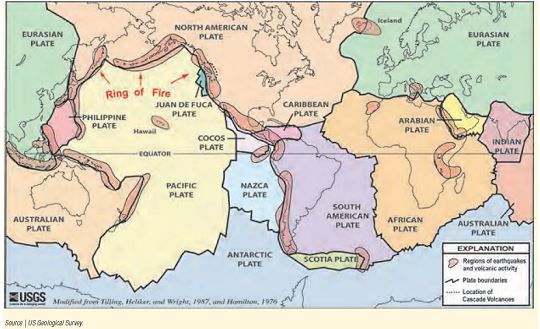 Geothermal fields are delimited zones that are characterized by a high and anomalous heat flux, however to be able to use this source a fundamental element, together with hot rocks, is necessary: water.

The best geothermal fields are generally found around volcanically active areas often located close to boundaries of tectonic plates.  Although some of the geothermal resources are located in populated, easily accessible areas, many others are found deep on the ocean floor, in mountainous regions, and under glaciers or ice caps.

“A geothermal system is any localized geologic setting where portions of the Earth’s thermal energy may be extracted from a circulating fluid and transported to a point of use.

A geothermal system includes fundamental elements and processes, such as fluid and heat sources, fluid flow pathways, and a caprock or seal, which are necessary for the formation of a geothermal resource.” (USGS)

“Geothermal Reservoir indicates the hot and permeable part of a geothermal system that may be directly exploited”. 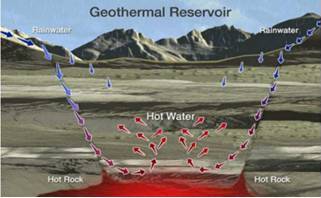 Examples of geothermal resources are illustrated below: 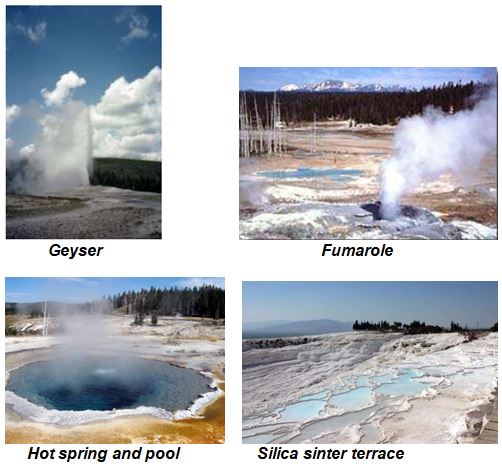 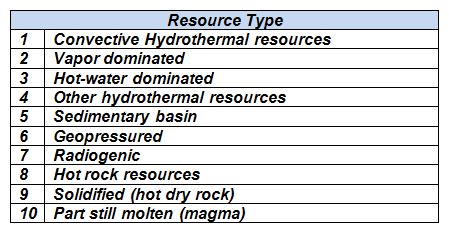 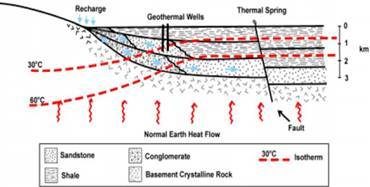 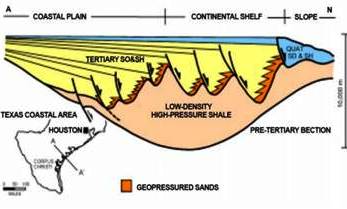 The most common criterion to classify geothermal resources is based on the enthalpy of the geothermal fluids.

While differing in detail, the industry recognizes three grades of extractive geothermal energy and temperature is used as the classification parameter because it is considered as one of the simplest parameters (temperature used is the average reservoir temperature measured in exploration wells or estimated by geo-thermometers or other means, Hochstein, 1990).

Geothermal resources have been classified by their reservoir temperatures into 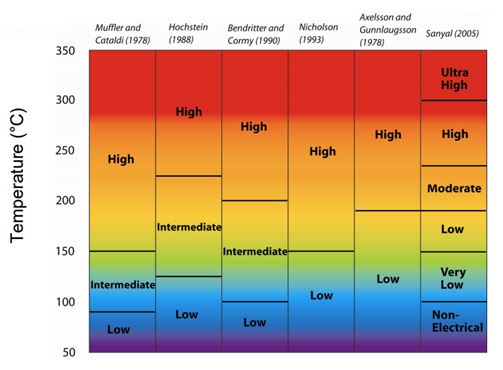 The table below shows a general classification based on temperature, typical reservoir fluid, common use and technology used

Table 3 – Classification based on temperature, typical reservoir fluid, common use and technology used

A distinction is made between

The water-dominated systems, whose temperatures may range from < 125 to > 225°C, are the most widely distributed in the world.

In vapor-dominated systems liquid water and vapor normally co-exist in the reservoir, with vapor as the continuous pressure controlling phase.

In high temperature geothermal systems, the underground waters are very hot, usually, over 220 ° C. Temperatures can be even higher, such as, for example, in Larderello (Italy) (260° C), Cerro Prieto (Mexico) (388° C) or S. Vito (Campi Flegrei, Italy) (400 °C) –  the latter area has registered the highest temperature ever observed in a geothermal system.

In these systems, the heat flux is 3-4 times higher than normal and can generally be found in correspondence with cooling magma intrusions, between 3 and 15 km of depth.

Vapour, drawn through wells and systems of pipes, is used to give power to a turbine system, which in turn produces electricity.

Vapour-dominated systems are quite rare and there are only four, spread around the globe: Larderello and M. Amiata (Italy), The Geysers (California), Matsukawa (Japan) e Kawah Kamojang (Indonesia), while the most important water-dominated ones are in Wairakei (New Zealand) and Cerro Prieto (Mexico).

In low temperature geothermal systems, where temperatures are below 150° C, direct production of electricity from vapor is not generally convenient.

However, if temperatures are above 90° C it is possible to use warm fluids to vaporize a second fluid that has a lower boiling temperature (such as freon, isobuthane or ethyl cloride), thus obtaining vapor for indirect electricity production, even if the productivity level of this process is rather low.