INTRODUCTION TO THE TECNOLOGY

METIS aims to improve the quality and speed of data acquisition through real-time quality control and processing, while at the same time slashing both the cost and HSE risks of operations.

“Tomorrow’s most promising onshore oil and gas exploration acreages are located in foothills, yet these areas have been underexplored as traditional exploration methods are not suitable to deal with these complex environments

Imagine a swarm of drones hovering over a remote tropical forest dropping what looks like large darts. The darts are actually seismic receivers delivered from the air. They are part of a project to rethink how surveys are done in remote spots where the jagged landscape limits movement on the ground.

The goal is to find ways to sharply reduce both the cost and the environmental impact of gathering the volumes of data needed to illuminate oil and gas deposits in complex, hard-to-image formations.

Rather than hacking paths through dense forests to set out lines of seismic receivers, they are building and testing a system using drones to drop thousands of receivers that will biodegrade after the survey.

A lead drone will coordinate the flight. It will ensure the drones remain safely above the tree tops. And it will use an infrared scanning system to ensure there are no large animals below before ordering the release, Total said.

A radio communication system developed by Wireless Seismic, called the Downfall Air Receiver Technology (DART) links the dropped DARTs to a control and processing center that monitors the quality of incoming data and makes changes if there are problems.

The current version of the system will be tested later this year when a single drone will be used to drop 100 of the DARTs over a 0.2-km2 area. That will show if a new carrousel on the underside of the drone, which carries four DARTS, can drop them one at a time at locations along its route.

They will also see how reliably the DARTS can record and transmit data. This will require landing them in a nearly vertical position for reliable data gathering, and then transmitting the information to a central processing center.

The drone test is the next step in a project that began in 2014 to develop the multiphysics exploration technology integrated system (METIS). 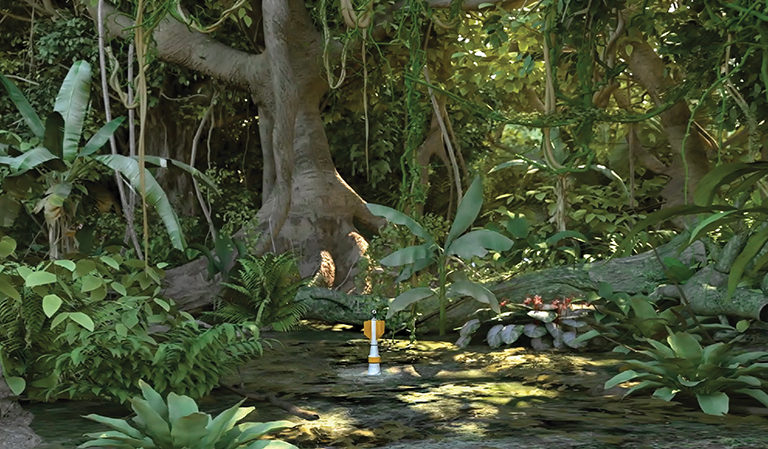 This dart-shaped seismic receiver picks up data and sends them to a central processing center during a seismic survey. Source: Total.

Automated drone flights carpeting the forest floor are just one of the aerial departures from conventional ground-based, data-acquisition methods.

To move in heavy loads without a road or runway, Total is working with a French company with an apt name, Flying Whales, to develop a new airship, called the HA2t. It is designed to be packed inside a standard shipping container for rapid delivery around the world. 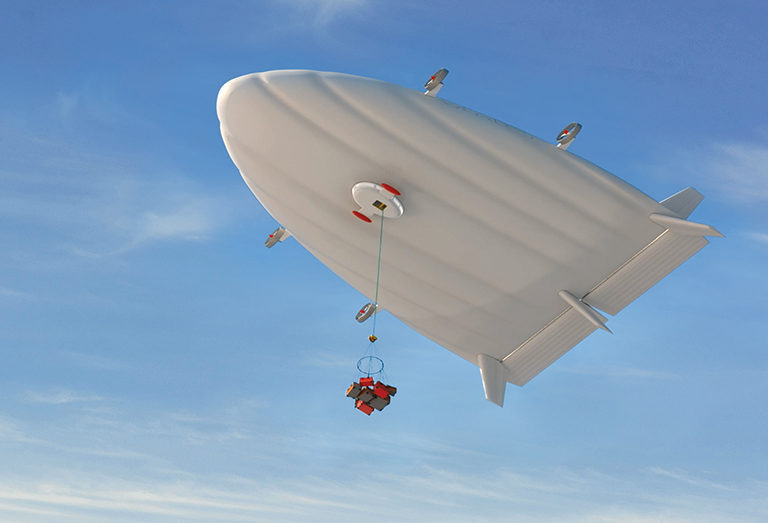 This airship, called the HA2t, can lift 2 tons into remote areas, and can be shipped in a standard cargo container. (Source: Total)

Before any heavy equipment arrives, data from satellite imaging and aircraft surveys using a variety of methods—hyperspectral, radar, and LiDAR (Light Detection and Ranging)—are used to create detailed maps of the surface and near surface. Those will be used to choose the best locations for seismic sound sources and receivers, and plan how best to manage the operation. 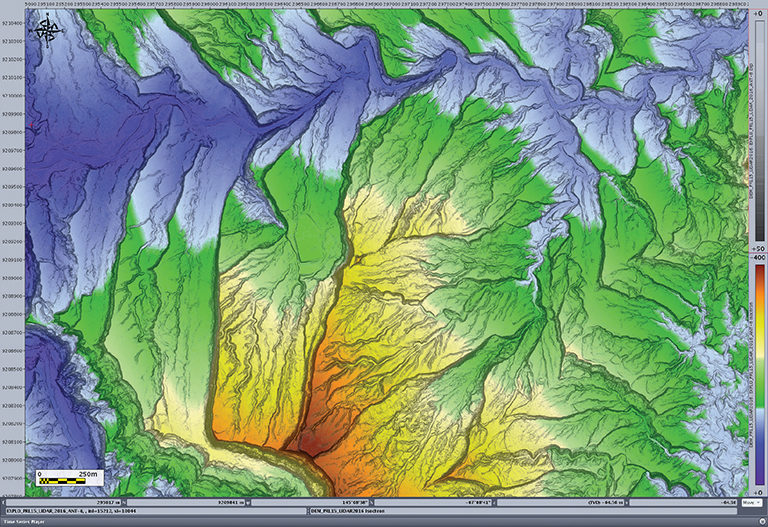 LiDAR data are used to map the contours of the survey area during the planning process. Source: Total.

Airborne surveys will be used to ­determine the height of the tree tops—drones are generally expected to fly about 20 m above them. They will also be seeking openings in the forest ­canopy (sky holes).

These natural openings would reduce the cost and impact of creating clearings for an operations center and the sound sources, which cannot be dropped in place. In early testing, the sounds required will come from buried explosive charges.

The third partner in the project, Geokinetics, is designing, acquiring, and processing the data in an environment where the difficult terrain will define the location and number of sound sources and receivers.

Technically speaking, good imaging of complex rock requires high trace density. That is a measure of the quality of the subsurface illumination, which is a function of the number of seismic sources and receivers. More receivers can compensate for fewer sound sources, and vice versa.

And they must be evenly distributed to ensure the entire area is covered. Adding receivers is likely to be the best option for increasing the trace density.

“By adopting a carpet receiver approach, where receiver stations are located on average 50 m in all directions, METIS reduces the dense source requirement” by using more receivers.

To verify the system is delivering the required quality and quantity of data, the communication system will provide real-time data, which will be analyzed to create preliminary images. Those will be used to ensure the quality of the data and to seek out any gaps, which could include further DART drops.

Keeping the work off the ground, and minimizing the impact when it does touch down, will require significant advances.

For the same reason the company needs to avoid placing receivers, it wants to be able to avoid collecting them afterward.

Bertini, in charge of piloting the “Earth Imaging” Total R&D program, said such an operation would require as many as 1,000 people for the 100-km2 pilot test. Their solution is for the DARTs to biodegrade after the survey is done. The DART case is already made of biodegradable material, and the company is working on finding ways to mass produce batteries and sensors that fade away.

He said it has identified likely solutions. Total has made significant investment in projects to develop bio-plastics and recently bought a battery company called Saft that has expertise in that area.

There are ways to make a biodegradable circuit board. Bertini said adapting those methods to create seismic components will “take significant effort.” And while there are prototype biodegradable batteries, more development is needed for full-scale field application.

To get more out of each DART, the company is working to extend the battery life, with a goal of 21 to 28 days of recording time. To conserve power, the devices can be turned off by a signal from the central data recorder when not needed.

And there is a plan to change the sensors to eliminate the need to stick the landing. For the upcoming test, the pointed DARTs will need to be standing within 15° of true vertical to record good quality seismic data. The company is working on replacing the geophone with multidirectional accelerometers (3-axis MEMS) that are smaller, lighter, and can record a wider range of data, even if the DART is not upright.

Total is also looking for an alternative to explosive sound sources that can be delivered to difficult-to-reach spots. It will also be dealing with a nontechnical issue—the likely reactions if people living on the ground begin seeing DARTs around them.

“There is clearly a cultural challenge to be handled at a very early stage of any kind of operation (seismic, drilling, etc.) in any foreign country, more particularly where cultural or education differences are high,” Bertini said. “