Technologies and processes should also be economically and environmentally sustainable.

Some of the area of major development are highlighted below.

It allows improvements in unconventional resources characterization (in particular – shale gas reservoir) by means of detailed geochemical and mineralogical analysis on cuttings and cores directly at wellsite.

Advanced Real-Time Cutting Analysis provides a valid support to the wellsite operations which results in time and cost savings.

The acquired data were also used to update the geochemical model utilized in the Petroleum System Model performed during the pre-drilling phase for a better understanding of the reservoir during the exploratory campaign.

Advanced Real-Time Cutting Analysis makes use of new improvements and development of  technology like:

Wellsite analyses are validated by laboratories analyses repeated on the same samples, in order to confirm the reliability and accuracy of the rig site measurements.

Hydraulic fracturing has allowed to exploit new oil and gas fields around the world since it was invented and developed decades ago.

Hydraulic fracturing is performed to create greater conductivity of fluids within the formation and improved communication with the reservoir and the wellbore.

The components of hydraulic fracturing include the hydraulic fluids and the proppants used to keep fractures within the rock open.

Multi stage fracturing is a technological breakthrough that is helping to change how fracking is applied in unconventional resources development.

As drilling technology exploits more complex and unconventional reservoirs, completion technology is being designed and developed to effectively fracture and stimulate multiple stages along a horizontal wellbore.

By placing the fracture in specific places in the horizontal wellbore, there is a greater ability to increase the cumulative production in a shorter time frame.

Limiting technologies in the completion of horizontal wells have slowed that growth in some reservoir applications (e.g. reservoirs that require specific fracturing treatments at certain intervals to make them economic to produce).

Before the development of the special designed system, the only options for completing an open-hole horizontal well was barefoot or using slotted or perforated liners

The development of a system to set in open hole, provide mechanical diversion and allow multiple fractures to be performed along the entire horizontal wellbore, with the benefit of cost and time savings

A mechanical open-hole packer system is capable of resisting high differential pressures, with fracturing ports located between the packers

OHMSs use hydraulically set mechanical packers instead of cement to isolate sections of the wellbore.

These packers have elastomer elements that extrude to seal against the wellbore and do not need to be removed or milled out to produce the well, and they provide isolation throughout the life of the well.

Series of packers could be run simultaneously in the well on a liner, and the fractures could be pumped in continuous succession.

When the system reaches total depth, the packers can be set, instead of using wireline and perforating the casing to allow fracturing, these systems have fracturing ports to create openings between the packers.

The major advantage of OHMS is that all the fracture treatments can be performed in a single, continuous pumping operation without the need for CT or wireline, saving time and costs and reducing high-risk health, safety, and environmental operations.

Once the stimulation treatment is complete, the well can be flowed back immediately and production brought on line. 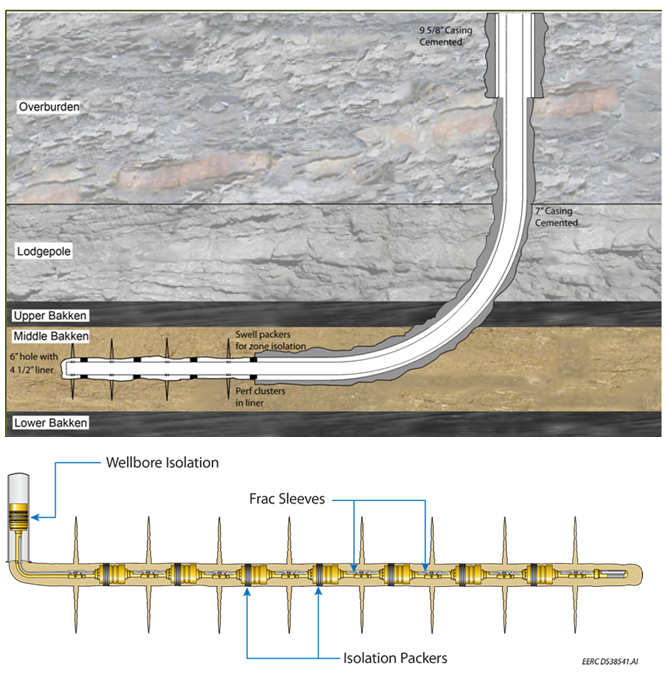 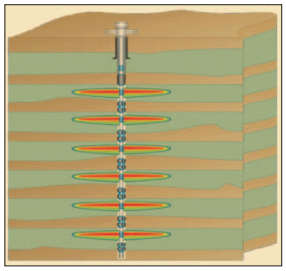 This type of completion involves cementing production casing in the horizontal wellbore and plug-and perforation/stimulation.

The mechanical isolation in the liner is achieved by setting bridge plugs using pump down wireline or coiled tubing (CT), followed by perforating and then fracturing the well to provide access to the reservoir.

Production using this method also can be limiting because cementing the wellbore closes many of the natural fractures and fissures that would otherwise contribute to overall production. 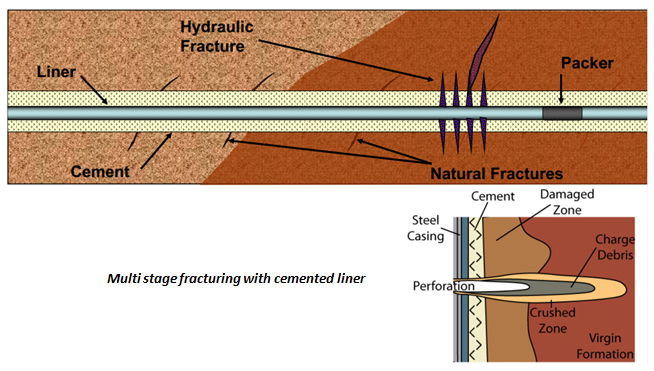 Microseismic monitoring of hydraulic fracturing operations has proven particularly valuable in locating and attempting to characterize the very small-magnitude events generated during the fracturing process in unconventional resources plays, where effective stimulation is critical to well performance.

They also are interested in the local geology of these events, including properties such as source types, implosive (closing) and explosive (opening) events, compensated linear vector dipole, double-coupling, and dip, strike and rake characteristics.

In turn, producers are using these attributes to help determine well spacing and orientation, the number and placement of stages, and forward prediction through discrete fracture network modeling.

Horizontal drilling has had a major impact on microseismic acquisition geometry.

The combination of horizontal drilling and hydraulic fracturing allows additional “contact” with the reservoir, without which many of these plays would be uneconomic. 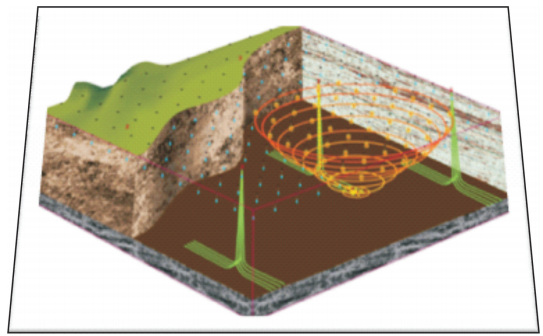 The expanding circles represent the microseismic signal emanating from a treatment point on one of the wells.

At each station a multi-element phone is cemented at about 100 m. depth.