Nowadays, CO2 recycling is one of the possible contributions to CO2 mitigation and an opportunity to use a low-cost (or even negative-cost, when considering taxes on emissions) carbon source.

CO2 recycling introduces a shorter path (in terms of time) to close the carbon cycle compared to natural cycles and/or an additional way to store CO2 in materials with a long life-time; in addition, it is a way to store renewable energy sources and/or use an alternative carbon source to fossil fuels. Moreover, CO2 recycling produces valuable products that can be marketed and thus add economic incentives to the reduction of CO2 emissions, while options such as storage only add costs. Carbon capture and recycling (CCR) avoids also the costs associated with transporting CO2.

Recycling of CO2 is therefore a possible contributor, together with other technologies, to a solution for the global issue of GHG emissions, but has only started to be considered in detail in recent years.

The lifetime of the products of CO2 conversion is another important aspect (see figure 1). The IPCC report on CO2 capture and storage[1] selected as a crucial parameter the time lapse between the moment of CO2 conversion into a product and CO2 release back into the atmosphere. A long lifetime of the CO2-based product will fix the molecule for a long time, thus preventing its (re-)release into the atmosphere. Most product lifetimes range between several months and a few years, with the exception of inorganic carbonates and polymers based on organic carbonates that store CO2 from decades to centuries.

CCR can be also viewed as a way to introduce renewable energy into the chemical and energy chain[2], by storing solar, geothermal, wind, or other energies in chemical form. The resulting chemical facilitates storage and transport of energy, and is particularly important if it is compatible with the existing energy infrastructure and/or can be easily integrated into the existing chemical chain. Therefore, recycling CO2 is an opportunity to limit the use and drawbacks of fossil fuels, while avoiding the high costs (including energy) associated with a change in the current energy and chemical chain. In considering CO2 recycling, the effect is thus not only direct, that is, subtraction of CO2 from emissions, but a combination of direct and indirect effects that amplifies the impact.  Finally, CO2 finds utilization when there is a profitable cost/benefit trade-off linked to CO2 (re)using in place of the existing technology, regardless of any considerations linked to capture and storage policies.

In the following, the emerging large-scale CO2 conversion routes will be shortly analysed. 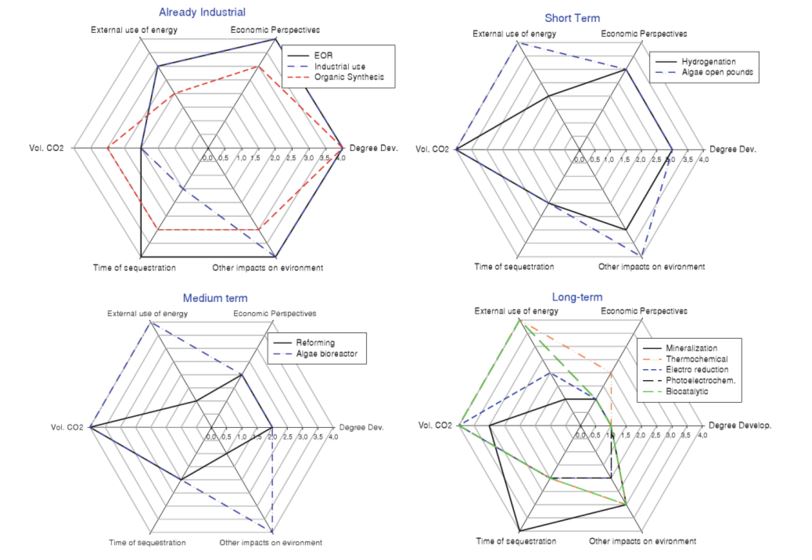 Figure 1 – Summary of the different options for CO2 the valorization[3].

The CO2 recycling by non biological route can be divided in three different sub-routes, that is Inorganic reactions, Organic reactions and Syngas production with further conversions.

Mineral carbonation, that is, the formation of carbonate from naturally occurring minerals such as silicate-rich olivine and serpentine, is an already well-recognized carbon storage option[4].

Calcium carbonate is a key product, for example of the Solvay process for production of Na2CO3 and NaHCO3, and can be mined as limestone. An extensive market exists also for synthetic or precipitated calcium carbonate for applications in the paper industry, plastics, rubber and paint products, with an estimated global market of more than 15 Mt a−1 [5]

One of the most promising process devoted to convert CO2 from flue gases in bicarbonate is the Skyonic’s patented CO2 mineralization process Skymine[6],  the first for-profit system converting flue gas CO2 into bicarbonate (baking soda) as main commercial product.  25 million US$ have been financed by the US Department of Energy (DoE) in 2010, to support the industrialization of this carbon capture technology that can be retrofitted to existing plant infrastructures.

Another project (Calera project) has also been selected in the same 2010 funding act (DoE share 20 million US$), and focuses on the production of  mineral end-products as building materials, such as carbonate-containing aggregates or supplementary cement-like materials. Inspired by the biogenesis of coral reef, the heart of the technology coarsely consisted of precipitating captured CO2 as novel (meta)-stable carbonates and bicarbonates with magnesium- and calcium-rich brines; the CO2 would originate from captured flue gas—from fuel combustion or other large plants—and the brine from seawater or alkaline industrial waste sources[7]

The synthetic routes from CO2 to organic compounds that contain three or more carbon atoms number in the tens, as extensively reviewed[8],[9],[10],  but only five are earmarked as industrialized. Figure2 is an overview of some of the possible organic chemicals produced from CO2. Among these one, the most important are Urea, Acrylates, Lactones, carboxylic acids, Isocyanates, Polycarbonate via monomeric cyclic carbonate, Alternating polyolefin carbonate polymers, Polyhydroxyalkanoate, Polyether carbonate polyols and Chlorinated polypropylene.

Figure 2 – A summary of organic chemicals produced from CO2[11].

The chemical reduction of thermodynamically stable CO2 to low-molecular-weight organic chemicals requires high-chemical-potential reducing agents such as H2, CH4, electrons, and others. The hydrogenation of CO2 can be connected to the well-established portfolio of chemicals synthesized from syngas (CO/H2) via the reverse water–gas shift (RWGS) reaction, where methanol, formic acid, and hydrocarbons emerge as the three main products of interest (see figure 3).

Methanol is one of the chemicals with the largest potential to convert very large volumes of CO2 into a valuable feedstock. It is already a commodity chemical, manufactured on a large scale (40 Mt in 2007)[12] mainly as a feedstock for the chemical industry towards chemicals such as formaldehyde, methyl tert-butyl ether (MTBE), and acetic acid, which makes CH3OH a preferable alternative to the Fischer–Tropsch (FT) reaction, due to the broader range of chemicals/products, and hence their application fields as well as higher productivity.

An alternate source of reducing hydrogen can be methane. The complete hydrogenation of CO2 to methane is the Sabatier reaction:

In terms of hydrogen consumption, and hence overall energetics, CO2 reduction to methanol rather than to methane might appear favorable given the better ratio by energy value of the product relative to the starting H2; nevertheless, specific conditions (for example, the need to produce substituted natural gas; SNG), know-how, and other local conditions have spurred industrial applications of the Sabatier reaction.

Figure 3 – CO2 routes to chemistry and energy products via syngas

Photosynthesis is the largest-scale CO2 conversion process, since it is present in all plants and photosynthetic micro-organisms (including microalgae and cyanobacteria).

In terms of CO2 consumption, a total of 1.8 tons of CO2 is needed to produce 1 ton of algal biomass[13]. Microalgae need also nitrogen and phosphorus nutrients. The integration of chemicals and energy production in large scale industrial algal biofarms has led to the “algal biorefinery” concept[14]. The chemical products of the biorefinery include carbohydrate and protein extracts, fine organic chemicals (e.g., carotenoids, chlorophyll, fatty acids) for food supplements and nutrients, pharmaceuticals, pigments, cosmetics, and others, along with energy fuels, for example, biodiesel, bioethanol, and biomethane. The biochemical conversion finalized exclusively to energy (e.g., anaerobic digestion, alcoholic fermentation, photobiological hydrogen production) has recently been reviewed by Brennan and Owende[15].

Thus, even if current stage of development in algal carbon capture at large emitter sites indicates an economic cost that is still too high, there are signals of a fast scientific and technological development in this area, including improvements in:

Another interesting technology is “The power-to-gas technology” which is being explored mainly with a focus to store renewable energy, and project developers so far tend to use CO2 from biogas as carbon source for methanation and hydrogen may also be directly mixed with biogas (see figure 4). Although these plants might provide very useful insights into the options of CO2 capture, methanation, and hydrogen storage, biogas as a carbon source may prove only sustainable if derived from (wet) waste and sewage[19].

In the same field is active the INPEX society with an interesting research which involves injecting CO2 into the ground by using CCS or CO2 Enhanced Oil Recovery (EOR) for the purpose of producing methane by microbes that live in oil and gas fields and water bearing strata (see figure 5). A constant supply of hydrogen is vital to microbes survival. INPEX has performed indoor experiments that use the power of electrochemical hydrogen reduction stage. The research has confirmed electrochemical methane production activation by microbes, including the microbes that lives in oil field in Japan[20]. 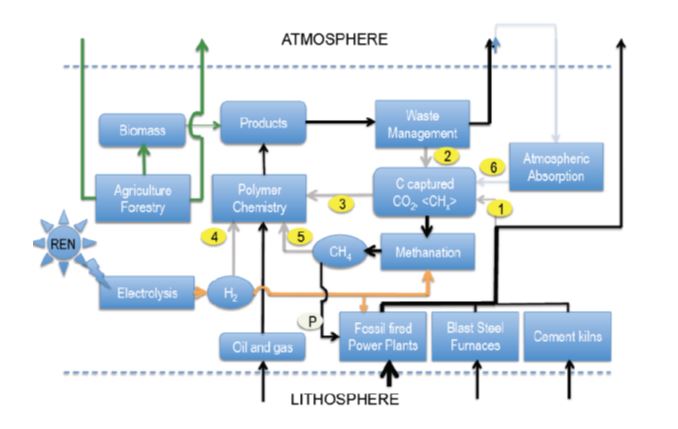 To conclude, optimistically, assuming that all the options for CO2 utilization can be fully implemented and considering that the use of CO2 as carbon source partly prevents the use of fossil fuels and incorporates renewable energy into the chemicals and energy chain (and thus has a more widespread impact than only on GHG emissions), a potential reduction equivalent of 250–350 Mt a−1 can be estimated in the short- to medium-term. This amount represents about 10 % of the total reduction required globally, that is, it is comparable to the expected impact of carbon capture and storage technologies, but with additional benefit in terms of (i) fossil fuel savings; (ii) additional energy savings; (iii) accelerating the introduction of renewable energy into the chemicals and energy chain.