Worldwide economic growth continues to drive demand for transportation fuels, and in part

There are several processes presently able to meet individual refinery needs and project objectives[2]. In particular, UOP LLC Company is one of the most active society in this field[3]. The basic flow schemes considered by UOP are single-stage or two-stage design. UOP two-stage Unicracking process flow schemes can be a separate hydrotreat or a two-stage process as shown in Figure 1. In the separate hydrotreat flow scheme the first stage provides only hydrotreating while in the two-stage process the first stage provides hydrotreating and partial conversion of the feed. The second-stage provides the remaining conversion of recycled oil so that overall high conversion from the unit is achieved. These flow schemes offer several advantages in processing heavier and highly contaminated feeds. Two-stage flow schemes are economical when the throughput of the unit is relatively high.

During the early years of hydrocracking, refiners were mainly interested in maximizing production of naphtha for reforming to high octane gasoline. However with advancements in hydrocracking catalyst technology, and the demand for maximizing distillate yields from heavier feedstocks, two-stage design offers a cost-effective option for a larger capacity maximum distillate unit operation.

A major difference between the first and second stage hydrocracking reactor reaction environments lies in the very low concentrations of ammonia and hydrogen sulfide in the second-stage (see figure 2). The first-stage reaction environment is rich in both ammonia and hydrogen sulfide generated by hydrodenitrogenation and hydrodesulfurization of the feed. This significantly impacts reaction rates, particularly cracking reaction rates, leading to different product selectivity and catalyst activity between the two-stages. The catalyst system can be optimized to obtain a highly distillate selective overall yield structure. Optimum severity can be set for each stage to achieve catalyst life target with minimum catalyst volume. Overall, the two-stage design allows optimization of conversion severity between the two stages, maximizing overall distillate selectivity. New advances in the two-stage Unicracking process design include several innovations in each reaction section of the design. The pretreating section uses a high activity pretreating catalyst that allows hydrotreating at a higher severity, providing good quality feed for the first-stage hydrocracking section and enabling maximum first-stage selectivity to high quality distillate. The second-stage is optimized by use of second-stage hydrocracking catalyst that is specifically designed to take advantage of the cleaner reaction environment. The second-stage catalyst is designed so that the cracking and metal functions are balanced. At the same time the second-stage hydrocracking severity is optimized so that maximum distillate selectivity is obtained from the second-stage of hydrocracking. 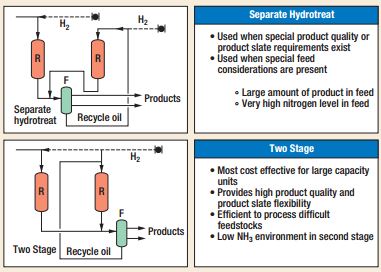 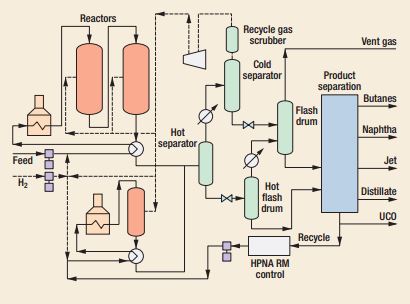 Designing catalysts which can be successfully used for processing heavy feeds requires an understanding of the interactions of many factors. Detailed knowledge is increasingly important for controlling reaction pathways to achieve specific product types to meet today’s market demands. The key considerations for optimal catalyst design require good understanding of the molecular transformations of feed to product with respect to catalyst functions and process variables.

Such consideration involves process severity and its impact on the extent of secondary cracking in the hydrocracking reactor. The key steps in the mechanism of hydrocracking paraffins consists of a sequence of steps beginning with dehydrogenation at metal sites to form olefinic intermediates which are then protonated at the acid sites to form the reactive carbenium ions. These, in turn, can isomerize and leave the catalyst surface without cracking after picking up a hydride ion at the metal sites. Alternatively, they can crack to form smaller alkanes which then leave the catalyst surface as hydrocracked products[4]. This process of isomerization and cracking to primary cracked products is referred to as “ideal cracking” and therefore it does not involve secondary cracking of the initially formed product. Secondary cracking often results in the formation of light ends which are of low value to a unit operating to make liquid transportation fuels.

Control of this sequence of steps to stop the reactions after formation of primary products is accomplished by careful selection of catalyst properties such as the strength and distribution of acid sites and tailoring the hydrogenation function to fit the acidity on the catalyst. In addition, particularly when heavy feedstocks are being processed, elimination of diffusion constraints which contribute to secondary cracking is accomplished by strict control of pore size and pore geometry of the catalyst to match the molecular dimensions of a given feed. These catalyst properties must also be matched to the service environment in which the catalyst is intended to function, including the recycle gas composition and the reactor pressure. Thus, detailed knowledge of molecular types and size in the feed is incorporated into catalyst selection criteria in order to make critical determination of the appropriate catalytic components to match feed for a given unit. 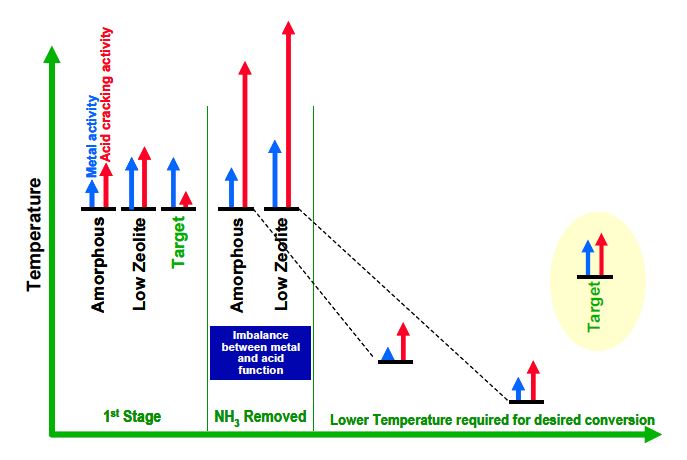 Hydrocracking catalysts are typically dual function catalysts, containing an acid-function for  cracking and a metal-function for hydrogenation. As shown in Figure 3, a good hydrocracking catalyst, amorphous or zeolitic, is designed to balance these two functions for optimum performance. In the figure two arrows indicate the type of functions (acid and metal) and the height of the arrows indicates the strength of the individual functions. A catalyst with proper balance of these two functions performs optimally in terms of desired product selectivity and catalyst temperature activity/stability. However if a catalyst, designed for the first-stage sour reaction environment typical of first-stage operation, is put in the cleaner reaction environment of the second-stage, a significant boost in the cracking function is observed while the performance of the metal-function remains basically unchanged. Thus, the catalyst that was in good balance for the first-stage environment becomes unbalanced for the second-stage environment resulting in sub-optimal performance. This difference is exacerbated, as the temperature required to achieve desired conversion is reduced. On the other hand the reduction in temperature reduces the metal functionality thus reducing hydrogenation. Therefore, for ideal second-stage catalyst, it is desired that the acidity of the cracking material is weak with a stronger metal-function so that even though the catalyst may appear imbalanced for the first stage sour environment it will be in balance in the second-stage reaction environment. Applying this design approach, UOP recently developed a new second-stage catalyst achieving higher distillate selectivity than the current UOP standard design.

Enhanced two-stage performance is achieved by optimized first- and second-stage conversion severity and application of the new second-stage catalyst. This results in significantly improved overall C5+ yields and a product slate which is more selective to a high quality heavy diesel product.

The enhanced two-stage design has improved distillate selectivity and the product slate is diesel selective with lower light-end production resulting in 7-10% lower hydrogen consumption. The product qualities are similar or better. The improved performance is achieved by optimum processing severity and use of new second-stage hydrocracking catalyst.