The growing concerns about climate change as well as the management of ever increasing liquid and solid wasters highly pushed the R&D in waste-to-fuel conversion[1]. The transformation of wastes into fuels can be realized by the different processes represented in Fig. 1 (extending the classification of 2nd generation of biofuels). The direct incineration of waste enables the highest recovery of the energy content from the thermodynamic point of view. On the other hand, depending on the composition, the emissions of the combustion process can be characterized by the presence of pollutants such as HCl, HF, NOx, SO2, VOCs, PCDD/F, PCBs and heavy metals[2].

Besides incineration, other thermochemical processes (see Fig.1) such as pyrolysis, gasification and plasma-based technologies, have been developed to selected waste streams. In general, thermal treatments of biomasses (and wastes) allow to get a wide spectrum of fuels (gaseous, liquid and solid) and many chemicals as co-product; the specific treatment is chosen according to the final fuel & chemicals products[3]. Many companies are using municipal solid waste (MSW) thermochemical conversion methods: Hitachi Metals Environmental Systems, Ebara/Alstom, Enerkem, Foster Wheeler, Nippon Steel, PKA, SVZ, etc. The first industrial-scale MSW to biofuel facility opened in Edmonton on 2014 by Enerkem converts 100000 t/year of municipal waste into chemicals and biofuels and is able to divert 90% of the residential waste from landfills[4].

The multiple synthetic conversion routes of major biofuels produced (Biofuel Flow) from first and second-generation biomass feedstock is represented in Fig 2. Conversion through biochemical and physiochemical processes is playing and important role in the recent biorefineries. These, following the  paradigm of zero-waste and zero-emission, allow the extraction of valuable substances processing biomass into a spectrum of marketable products and energy and are expected to play a fundamental role in the future low carbon economy[5]. Moreover, biorefineries would be very attractive from an employment creation perspective, resulting in significantly more jobs per unit of biomass feedstock than conventional processes[6]. A brief review of the processes and technologies cited in Fig. 1 is given in the following. 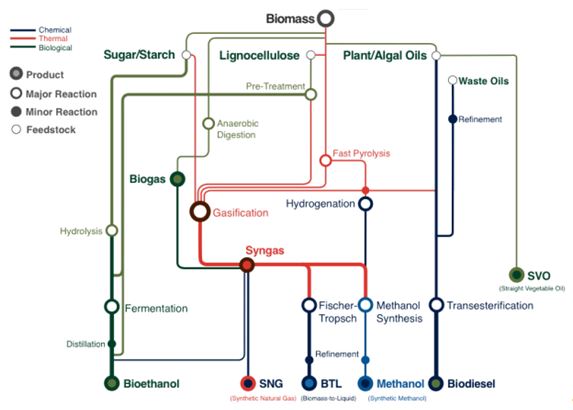 The pyrolysis occurs without oxygen at atmospheric pressures in a temperature range of 250-900°C. Generally, high vapour residence time favours char production (at lower process temperature) and gas yield (higher temperatures), whereas moderate and short vapour residence times favour the liquid production. In fast pyrolysis, the heating occurs at a moderate temperature (400-550 °C) with very high heating velocities (100°C/s). A successive rapid quenching is required to condense the vapors, to minimize secondary reactions and coalescence or agglomeration (aerosols formation). The heat duty can be recovered from the combustion of part of the produced syngas. The liquefaction by pyrolysis of solid wastes has been widely reviewed in the last years, due to the increasing interest in integrated technologies to derive fuels and chemicals from solid wastes.[8] A review on process conditions for optimum bio-oil yield in hydrothermal liquefaction of biomass is given by Akhtar and Amin[9].

Municipal plastic wastes, through the cracking and pyrolysis, can produces bio-oil of a good quality, a valid option to plastic recycling or direct combustion[10]. For example, Sharma et al. 2014 repots a study of high-density polyethylene grocery bags pyrolysis to produce alternative diesel fuels or blend components for the petroleum diesel (saturated aliphatic paraffins) of very good quality (with cetane number and lubricity). Many examples of pyrolysis plants are located in Japan. Mogami Kiko owns a Pyrolysis plant (Capacity of 200 kg/h) that produces 80-100 Nm3/h of gas with LHV of 5000-6000 kcal/Nm3 30-40 kg/h of tar and 20-30 kg/h of char, processing several kinds of plastic in a rotary kiln. Environment System have implemented the pyrolysis of thermoplastics waste (without chlorine) in a tank reactor with continuous feeding of scrap film (extruder). Toshiba implemented the continuous feeding of thermoplastics waste (no chlorine, 40 tons/day) into a rotary kiln (externally heated) producing liquid and gaseous hydrocarbons and 4MW cogeneration. Samshiro et al. described the fuel oil production from MSW in sequential pyrolysis and catalytic reforming reactors[11]. Wong et al. [12], report alternative solutions to solid waste pyrolysis as fluidized bed and supercritical water. Although microwave-assisted pyrolysis is another possible solution to the problem, especially in the treatment of commingled plastic waste, this relatively new concept requires more feasibility studies.

Gasification, operating at high temperatures (>700 °C) without combustion results into solid and gaseous products.. Although associated with lower power production and higher complexity, the gasification of solid wastes can count about a hundred of operating plants having a capacity in the range 10–250∙103 t/y and represents a valid alternative in the field of waste management[13]. Moreover, gasification-based technologies enable the reduction of waste amount to disposal in comparison to the conventional combustion-based WtE units and allows alternative strategies for the syngas utilization[14]. Therefore, gasification of waste has been exploited as alternative to combustion for the waste to energy (WtE) processes in order to improve the performances and the distributed WtE policy.

By using multiple high-temperature processes, including the breaking down of organics through plasma arcs, enables the production of a mixture of hydrogen and carbon monoxide. In this way, metals and other inorganic materials in garbage can be isolated and recycled; the combination of high temperatures and an oxygen-poor environment prevents the production of dioxins and furans; eventually the syngas can either be directly burned in gas turbines to produce electricity, or it can be converted into other fuels, including gasoline and ethanol. Enea reported several experimental campaign conducted at lab and pilot-scale devices[15]. Molino et al. investigated the steam gasification of scrap tires as a sustainable and cost-effective alternative to tire landfill disposal; steam activation of the char derived from the tire residues of the gasification process was carried out at constant temperature and feeding ratio between gasifying agent and char, using different activation times (180 and 300 min)[16].

These methods are based on the separation of useful chemical compounds with physicochemical extraction such as cold press extraction, supercritical fluid extraction, and microwave extraction.  In the recent years, cavitation assisted (e.g. ultrasound assisted) extraction process has been utilized for the biomass pretreatment, delignification and hydrolysis, extraction of oil, fermentation and synthesis of bioalcohol[17]. Transesterification of plant or algal oil is a standardized process by which triglycerides are reacted with methanol in the presence of a catalyst to deliver fatty acid methyl esters (FAME) and glycerol. The extracted vegetable oils or animal fats are esters of saturated and unsaturated monocarboxylic acids with the trihydric alcohol glyceride (triglycerides) which can react with alcohol in the presence of a catalyst, a process known as transesterification (according to the following simplified scheme of reactions).

The simplified process scheme is given in Fig. 3. From an economic point of view, the production of biodiesel has proven to be very feedstock-sensitive. Leung et al., report a review on biodiesel production using catalysed transesterification[18]. Waste vegetable oil (WVO) can also be converted after refinement. It has a low sulphur content and it is not associated to change in the land use. The utilization of waste cooking oils is explained in details in the review of Kulkarni et al.[19] 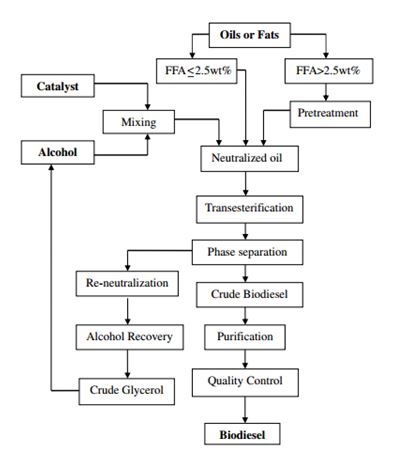 In general, the conversion of biodegradable waste or energy crops, through anaerobic digestion, produces a gaseous fuel called biogas (mainly methane and carbon dioxide). In similarity, the wastes in landfill generates gases (landfill gases, LFG) that can represent a source of renewable energy. Some examples of commercial conversion processes (typically run via anaerobic digestion or fermentation by anaerobes) are reported in the table below (extracted from). 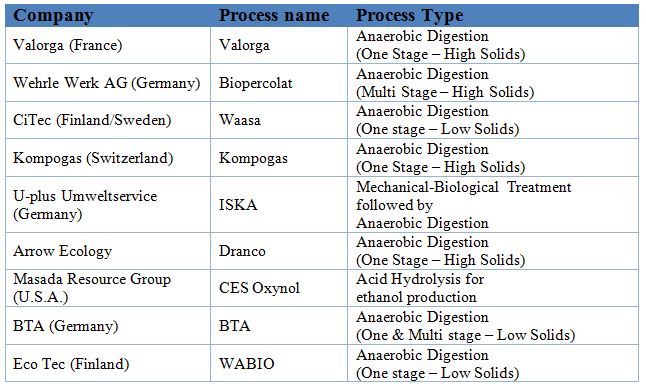 Microbial hydrogen production using anaerobic fermentative bacteria is considered a cost effective technology because the process can use waste materials or wastewaters. The biological production pathway of hydrogen and methane (by microorganisms) can be divided into two main categories: by photosynthetic bacteria under anaerobic or semi-anaerobic light conditions, and by chemotrophic anaerobic bacteria[20]. During the process, organic matter is converted to volatile fatty acids through hydrolysis and acidogenesis (acidogenic fermentation or dark fermentation). This latter produces fuel gas with higher rates. Hydrogen yields from various crop substrates is reported by Mei Guo et al.[21] Kurniawan et al. reported a study on acid fermentation combined with post-denitrification for the treatment of primary sludge[22].

Since 1980 US Department of Energy supported the Aquatic Species Program (ASP) to exploit algae as fuels (mainly oil from microalgae). The ASP firstly worked on growing algae in open ponds and on studying the the impacts of different nutrient and CO2 concentrations. The program ended in 1995 due to financial issues. In recent years, the energy security risks and the advancements in biotechnology (the ability to genetically engineer algae to produce more oils and convert solar energy more efficiently), has rebirth the R&D in this field[23]. Although the issue of low oil productivity per acre, the cultivation of oleaginous microorganisms (microalgae) can contribute to the biofuel production and to the mitigation of carbon emissions. In this files, further improvements are also needed in the downstream processes and the light supply systems.

[2] Bosmans, A., et al., The crucial role of Waste-to-Energy technologies in enhanced landfill mining: a technology