Liquefied Natural Gas (LNG) is used for transporting natural gas (NG) to distant markets, not supplied by NG grid connecting the extraction/production point to the users.

Basically the LNG process is composed by the following steps[1]:

But, the high production, transportation and storage costs have reduced the LNG technology spread to specific cases in which there are not other cheaper ways to transport the NG.

But, the market and political issues related to the NG are increasing the interest on this alternative transportation technology, which has the benefits of enlarging the potential markets for sellers and the potential suppliers for the buyers (refer to Figure 1). The growing interest has led to greater and greater investments on LNG Research & Development and on its applications. 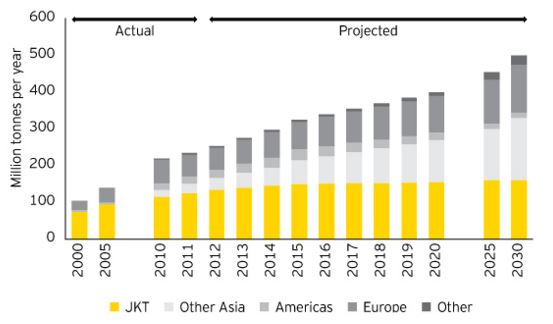 In the following, some of the technologies and innovations related to the LNG production, the transportation and the regasification fields are reported and assessed.

The pretreatment unit, where the undesired substances are removed, is the same used in the conventional production/distribution process and is composed by separations units and a slug catcher able to separate the gas from oil and water phases.

Then, the NG is purified from acid gases as hydrogen sulfide (H2S) and carbon dioxide (CO2) by means of absorption/adsorption processes. Also in this step, conventional technologies are used.

In the step 3, an adsorbent is used to remove water from the natural gas from which impure substances have been removed. By this way, ice will not form during the subsequent step.

The main liquefaction processes and innovations are: 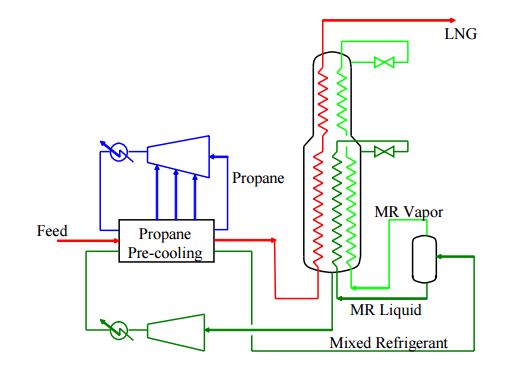 Since all these configurations require large amounts of energy (mainly for the refrigeration compressors), growing R&D efforts are devoted to the process optimization. The main R&D activities are focused on the cryogenic heat exchanger design and optimization (Air Product and Chemicals Inc. technology[8]), on the improvement of refrigerant compressors (SplitMR technology) and on the efficiency of the compressors’ drivers.

The LNG transportation process can be summarized as follow:

The R&D on the sector is mainly focused on the improvement of FSRU performance and reduction of costs, being the FSRU an attractive fast track solution for small markets and emerging economies.

The regasification facilities are able to boil the LNG and to sent it into the NG grid. Almost 100 LNG regasification terminals are now operating worldwide and many others are under-construction, mainly in Europe and Asia.

The most applied regasification technologies are: 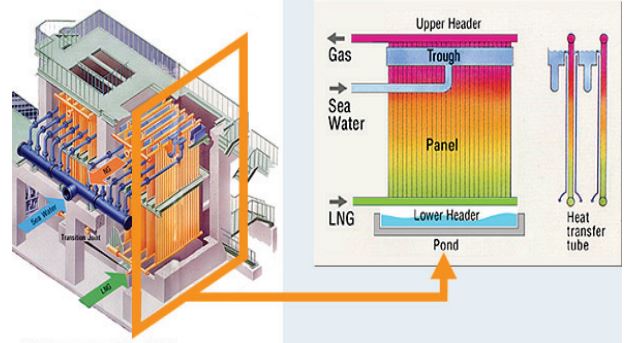 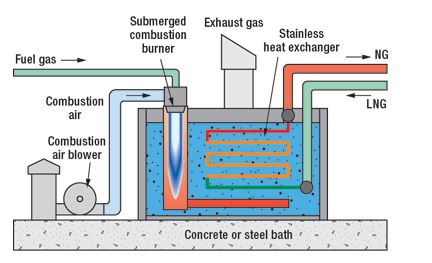