The negative environmental effects due to the extensive use of fossil fuel are boosting the research of innovative solutions to exploit renewable energies for the production of clean electricity without emitting pollutants or GreenHouse gases (GHGs).

Among the renewable energies, solar energy is the most interesting. Sun is widely available and radiates on Earth’s atmosphere 1367 W/m2. But, most techniques for generating electricity from heat need high temperatures to achieve reasonable efficiencies and the output temperatures of non-concentrating solar collectors are limited to temperatures lower than 200°C. Therefore, concentrating systems have to be used to reach operating temperatures suitable for electricity production.

Many interesting solar concentration technologies have been developed and proposed during the last years and the solar electrical energy production feasibility has been demonstrated, even if more efforts to reduce cost are needed to boost a wide commercialization.

The main elements composing a solar power concentration plant are:

In the following, some of the main solar concentration power technologies are described.

The technology consists of large curved mirrors, which concentrate the sunlight by a factor of 80 or more to a focal line. Parallel collectors build up a 300–1200 m long collector row, and a multitude of parallel rows form the solar collector field and the tracking system is one-axis type. 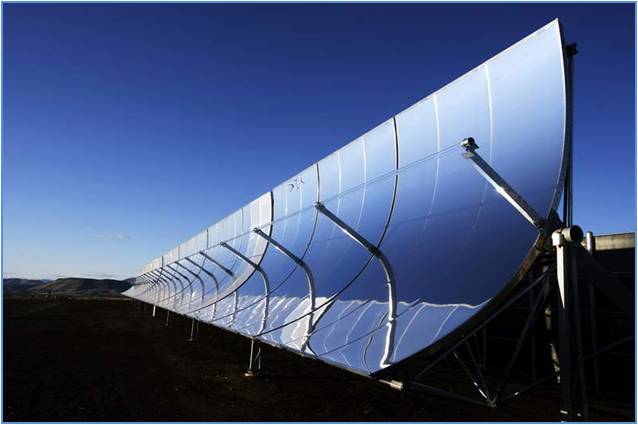 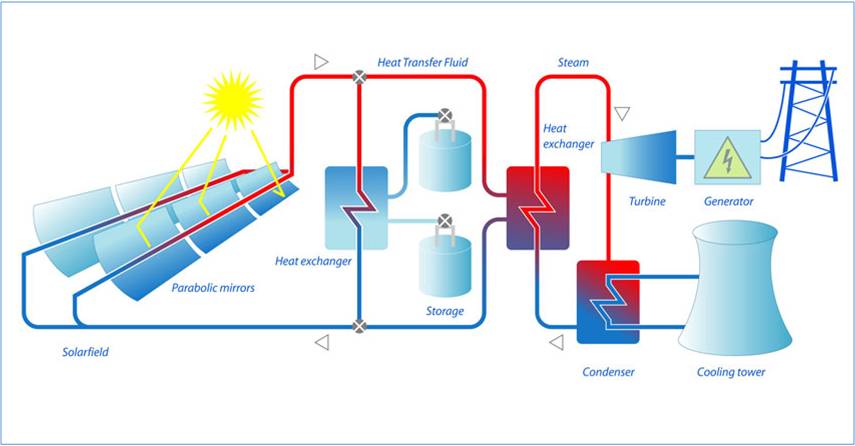 Parabolic trough power plants are classified in function of the thermal fluid flowing through the absorber:

The most common thermal fluid used is the thermal oil, but the molten salt technology is becoming more and more interesting and a first pre-industrial application has been installed in Italy (Priolo) in 2014 [2].

ENI has identified an original mixture of salts able to replicate the outlet temperature obtained by the ENEA technology (up to 550°C). Moreover, ENI has developed in 2012 a selective coating in metal-ceramic (CERMET) alloy able to increase the absorbance of solar radiation by reducing emissivity, thus also reducing the heat losses of the receiver unit [3].

The efficiency of the solar thermal power plant is the product of the collector efficiency, field efficiency and steam-cycle efficiency [4].

Hundreds or even thousands of large two-axis tracked mirrors are installed around a tower. The slightly curved mirrors are also called heliostats; a computer calculates the ideal position for each of these, and a motor moves them into the sun. 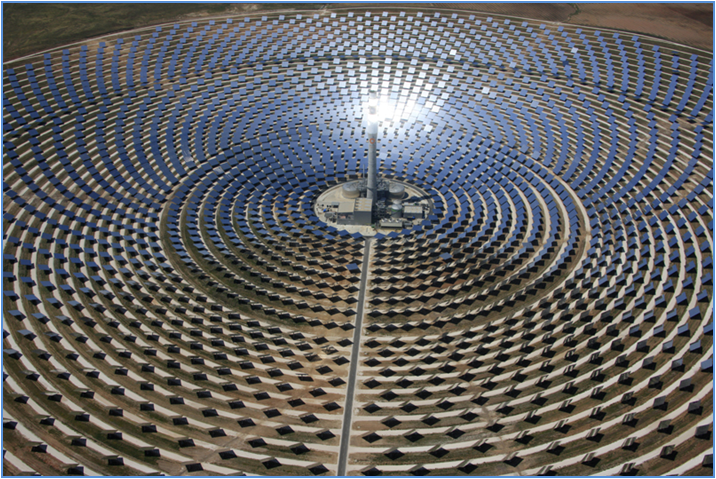 The absorber is installed on the top of the tower and it is heated up to temperatures of 1000°C or more. Hot air or molten salt then transports the heat from the absorber to a steam generator, where superheated water steam is produced, driving a turbine and electrical generator.

There are two main types of solar tower typology: 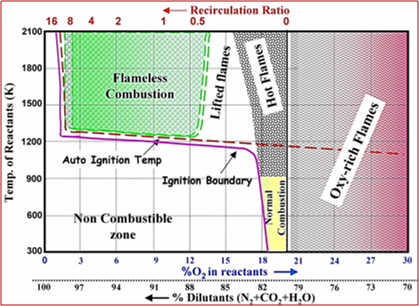 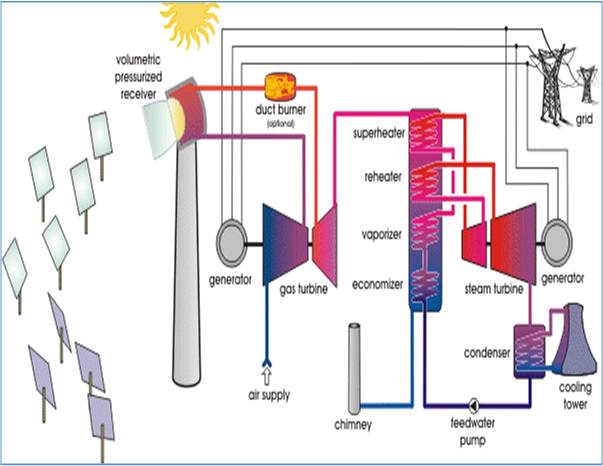 No commercial tower power plant exists at present. However, prototype systems – in Almería, Spain [5], in Barstow, California, US [6], and in Rehovot, Israel [7] – have proven the functionality of various tower power plant concepts.

Dish–Stirling systems can be used to generate electricity for small and medium applications (some kWs). A parabolic concave two-axis tracked mirror (the dish) concentrates sunlight in the focus, where a receiver is placed and heated up to 650°C. The absorbed heat drives a Stirling motor, which converts the heat into motive energy and mechanical drives a generator to produce electricity.

If sufficient sunlight is not available, combustion heat from either fossil fuels or biofuels can also drive the Stirling engine and generate electricity. The system efficiency of Dish–Stirling systems can reach 20% or more.

Some Dish–Stirling system prototypes have been successfully tested in a number of countries. However, the electricity generation costs of these systems are much higher than those for trough or tower power plants, and only series production can achieve further significant cost reductions for Dish–Stirling systems.

Two solar parks using the Stirling Energy Systems are currently being developed in US with a capacity of  1.4GW. 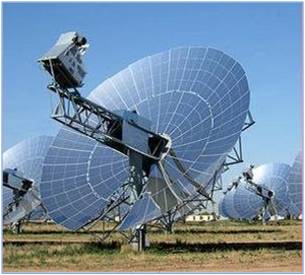 The technologies described above use only the direct irradiance. The Chimney Power plant is able to collect the global irradiance and converts it into electricity.

A solar chimney power plant has a high chimney (tower), with a height of up to 1000 metres, and this is surrounded by a large collector roof, up to 130 metres in diameter, that consists of glass or resistive plastic supported on a framework. Towards its centre, the roof curves upwards to join the chimney, creating a funnel.

The sun heats up the ground and the air underneath the collector roof, and the heated air follows the upward incline of the roof until it reaches the chimney. There, it flows at high speed through the chimney and drives wind generators at its bottom.

The efficiency of the solar chimney power plant is below 2%, and depends mainly on the height of the tower, and so these power plants can only be constructed on land, typically in desert regions, which is very cheap or free.

However, the whole power plant is not without other uses, as the outer area under the collector roof can also be utilized as a greenhouse for agricultural purposes. As with trough and tower plants, the minimum economical size of solar chimney power plants is also in the multi-megawatt range. 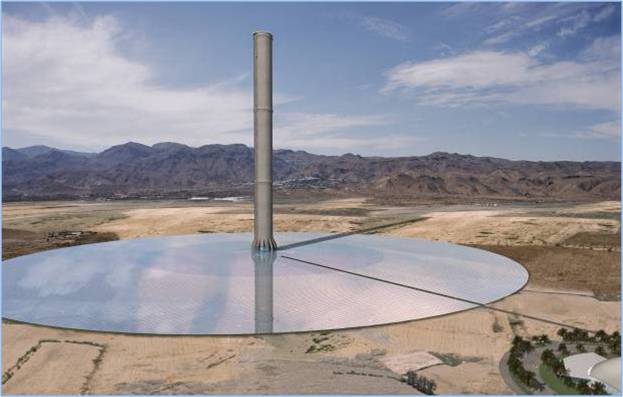 The main application of solar concentration power plants is the clean electricity production.

Moreover, an increasing interest is focused on the coupling of solar concentrating power plant with chemical processes, for which a high heat duty is required. Some studies are reported in the literature about the possibility to exploit the high-temperature thermal flows generated from the solar plant for supporting industrial production processes [9].