Well integrity is defined in the NORSOK D-010[1] (a functional standard which fixes minimum requirements for equipments of the oil and gas production wells) as “application of technical, operational and organizational solutions to reduce risk of uncontrolled release of formation fluids throughout the life cycle of a well“.

Clearly, production tubes have the greatest probability of failure since they are exposed to corrosive elements from the produced fluids. Moreover, the production tubing consists of many connections, which are points of weakness with high risk of leak. International standards impose the installation of two well barriers between the reservoirs and the environment in order to prevent the loss of containment.

In this paper, among the components of the production tube sealing system installed to avoid fluid losses, the innovative sealing materials are assessed and compared.

The most common used sealing material is the cement, which is a fully known and cheap materials. But, there are many properties not ideal for handling well integrity issue as, for example, gas migration through its structure, long term degradation due to temperature and chemical substances exposure, shrinking, etc.

The following figure shows the main problem in applying cement as sealing material in well casing[2]. 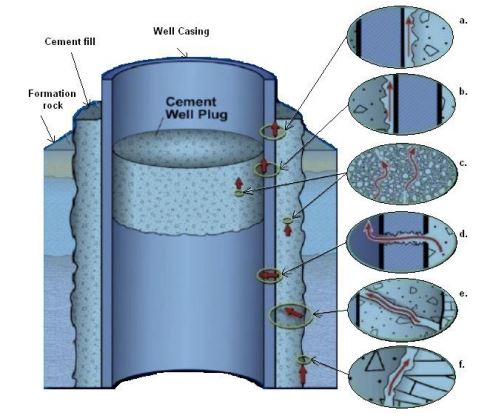 Figure 1 – Cement technical drawbacks in sealing application2: a), b), f) leak paths due to poor bonding between cement and casing/formation; c) fluids migration due to cement fracturing; d) leakages occurring for casing failure; e) flow path through the cement layer due to gas migration during hardening.

For this reason, alternative materials for sealing are studied in order to overcome the issues related to the cement application.

Such materials have to assure a series of properties, among which:

ThermasetR is a polymeric based resin used to solve a series of well integrity issues, as lost circulation, compromised wellbore integrity, plug and abandonment, and the remediation of sustained casing pressure[3],[4].

As a liquid, ThermaSet is easily pumped and injected since it not contains solid particles. However, particles can be added to accurately modulate the liquid density.

Compared to cement, ThermaSet has a higher compressive and tensile strength, thus improving the sealing material mechanical properties and its behavior under the variable loads which could be caused by pressure and temperature cycles that cause the casing to expand and contract, exerting a force on the annulus material.

In the following table, the ThermaSet and a typical cement (class G Portland) properties are compared[5],[6], attesting the improved characteristics of the innovative material.

The excellent properties of the material are maintained over time, without showing significant decays: Figure 2 shows the compressive strength value after 1 year under a crude oil pressure equal to 500 bar, demonstrating that its value stabilizes at a value within the range 40-45 MPa6. 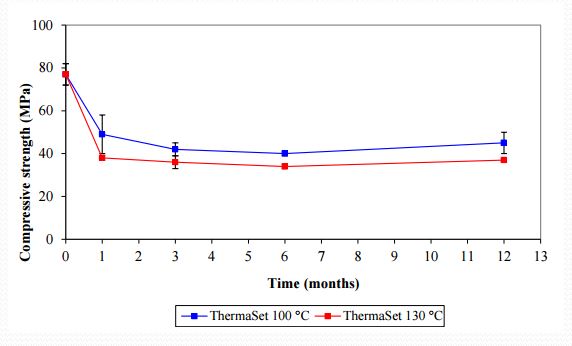 Sandaband is a patented material[8], owned by Sandaband Well Plugging (SWP), consisting of 70% to 80% quartz solids with a variable grain size diameter (between 1 µm and 2 mm)[9]. The rest of the volume is composed by water and chemicals that make the material easily pumpable.

All materials composing Sandaband are chemically stable, with no degradation over time or reaction with other chemicals.

An important property is that Sandaband behaves like a Bingham plastic material, characterized by the fact that it needs a shear stress to start flowing and then has a linear dependence between shear stress and strain, thus allowing that the materials quickly form a rigid body as the pumping is stopped (refer to Figure 3). 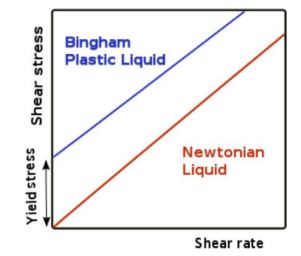 Sandaband has a series of unparalleled properties, making it excellent for the application of sealing material for well integrity[10]:

Tests demonstrated the long-term integrity in the temperature range -10°C to 250°C, the low permeability under operating conditions, the absence of effects on the gas- tightness for casing moving and vibration.

The innovative materials has been tested on field for a Temporary P&A (Plug and Abandonment) (BP Norway Ula Well 2007) and for a Permanent P&A (Det Norske Oljeselskap).

Ultra Seal, developed by CSI Technologies[11], is a material composed by a resin and a hardener, modulated to make the sealant pumpable. Resin and hardener are mixed on the surface in a conventional mixing equipment and clean-up is with a minimal quantity of a methanol and water mixture.

The material is characterized by low permeability and excellent mechanical properties. 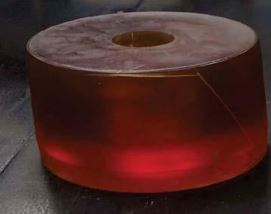