The world production of chemicals in 2020 will increase of 144 Million of metric tons[1] with a market of 4.650 US$ billion.[2] Automation and Process Control have a pivotal role in industrial plants, indeed, they allow to improve products quality, plants efficiency, the safety and reliability of the processes.

The automatic feedback controls were introduced in 1920-1930s mounted on the controlled equipment. Since then, process control has spread rapidly from the first digital devices at the end of 1950s up to Programmable Logic Controllers (PLCs) and Distributed Control System (DCS) in 1970s.Nowadays networks of computers manipulate thousands of variables, but 85-95% of feedback control loops are based on Proportional-Integrative-Derivative (PID) system developed in 1930s. Furthermore, the flow rates of liquid and gases are controlled by pneumatic valves.[3]

The use of advanced controls can increase plant’s profit margin between 10-20% and reduce emissions of about 70%[4].Therefore, in the following sections PID tuning optimization, APC (Advanced Process Control) and MPC (Model Predictive Control) are described. Finally, an overview on the latest software in process control and “smart control” are discussed.

The Aspen Technology Inc. has defined five levels of maturity for a refinery and chemical plant depending on the control level, from level zero where no process simulation is used up to level four, where several models are reported in a single flowsheet and engineers can make decisions by monitoring key parameters.[5] As can be seen in Figure 1, a plant, usually runs in a safety zone called “comfort zone” away from constrain limits. With PID optimization and APC is possible to reduce from three to ten times the amplitude of oscillations working near constrain limits and increasing productivity and profit margins.[6]

Therefore, in this section PID tuning optimization and APC controls are described.

The PID controls are the most common control used into chemical and petrochemical plants due to easy implementation and robustness. (Figure 2)

The controller takes a corrective action depending on the magnitude of the error[7]:

There are several tuning techniques that allow to find proper PID parameters.

These methods were developed since 1940s and nowadays can be divided into two categories: Classical and Artificial Intelligent methods.

Classical methods include: Ziegler and Nichols and Cohen and Coon Methods. Ziegler and Nichols proposed two methods, the first called “step response” that can be applied only to open-loop stable plants. It considerers, indeed, the response of industrial process such as a S-shape without overshoot. As can be seen in Figure 3,the delay time (L) represents the intersection of tangent line at inflection point of the curve and x-axes. While time constant (T) represents the intersection with steady state line. From these values is possible to find PID parameters.

The second method is called “continuous cycling method”. It allows to find the critical frequency of the system by increasing the proportional gain until stability limit. The two parameters that describe the response of the system are KCU(ultimate gain) and PU(ultimate period). In Table 1 are shown the relationship between PID parameters and the two Ziegler and Nichols methods.

Table 1–Parameters of the Step Response and Continuous Cycling Method.[10],[11]

Ziegler and Nichols methods are suitable for level control but not for flow, liquid pressure that require a rapid response.[12]In these cases Cohen and Coon methods are used.[13]This method finds three poles: two complex and one real that allow to minimize the integrated error and to have a decay ratio of about ¼.[14]

Artificial Intelligent Methods include dozens of methods. Some of them are described, such as Genetic and Differential Evolution Algorithms. For the other ones such as Simulated Annealing (SA), fuzzy system, Artificial Bee Colony (ABC), Particle Swarm Optimization (PSO) etc. it can be consult references[15],[16]  .

Genetic Algorithm starts from a random population of binary strings called chromosomes each of them represent the solutions of the problem. The strings are encoded to real number that defines PID parameters. These values are elaborated by PID controller and the response is evaluated by means of objective function such as MSE (Mean Square Error), IAE (Integral Absolute Error), ISE (Integral Squared Error) etc. The fitness values are subjected to a process of selection, crossover and mutation until best fitness is obtained.[17] 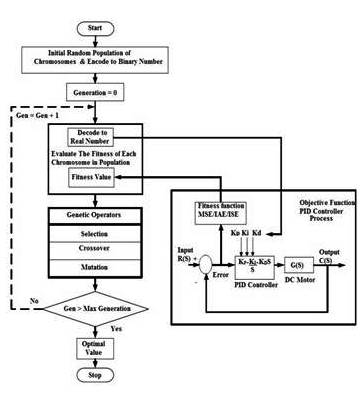 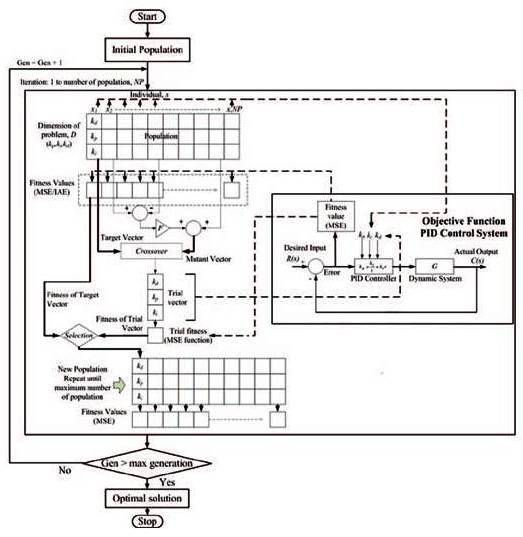 The main limit of feedback control is that corrective action takes place only when output is perturbed from its set point. Therefore, more advanced controls were developed such as PID plus feed forward that allows to intervene before disturbance takes place or cascade composed by two controllers, two sensors and one actuator acting on two processes in series.[20]Despite PID controllers ensure good stability and suppression of the disturbances, process performance optimization fails due to the multivariable nature of it and the complex interactions between controlled variables. Therefore, Advanced Process Control are necessary.[21]

The APC includes all software that allows to control critical variables and predicts quality in real-time such as:

An example of APC implementation is described by Howes et al.6 for a lubrification of oil process. The system consists of 12 manipulated variables, 28 controlled variables and 11 feedforward controls. By means of Pitops software developed by Pi Control the plant has increased rate of production of 5% saving about 1.3 M€. The software, indeed, gives the parameters of the system in 10 minutes basing on historical data without step tests. Other examples are Canada’s Yara Belle PlaineInc. and South Korea’s LG Petrochemical Corp. The first applied APC techniques to a nitric acid plant reducing methane emissions by 25% maintaining high temperature combustion. While the latter, applied to a naphtha cracking, allows to improve yield by 5%, reducing energy consumption in cold side by 8% and saving 100.000 $/y.[24]

The precursor of MPC is represented by LQG (Linear Quadratic Gaussian) developed by Kalman in 1960s, but the first MPC generation appeared in 1970s with IDCOM (developed within ADERSA) and DMC (developed within Shell Oil). Nowadays we have reached the fifth generation where Honeywell, AspenTech and Shell dominate the markets[25]. The MPC is suitable to describe the behaviour of MIMO (Multi-Input, Multi-Output) processes.

As can be seen in Figure 6 a classical plant control provides for different hierarchical levels[26]: a plant wide-optimization, a local economic optimizer and a dynamic constraint control. Usually this is done by several PID controls lead-lag (L/L) blocks and high/low select logic. With MPC, shown in more detail on the right end, this can be achieved with better results by taking an action on the difference between actual and predictive value (residuals).11 ue (residuals).11

Nowadays the main MPC software includes: DMCplus developed by AspenTech, SMOC of Shell Global and RMPCT of Honeywell. The following is a brief description of these, for more details see Lahiri[29].

DMCplus derives by the fusion of Dynamic Matrix Control (DCM) and Setpoint Multivariable Control Architecture (SCMA). The software is composed by several packages and allows to simulate Finite Impulse Response (FIR), linear Multi-Input, Multi-Output (MIMO) and nonlinear Multi-Input, Single Output (MISO) State Place. Recently AspenTech has introduced the Adaptive Process Control that reduces the possibility to have “flipping” behaviour of the plants due to the difference between the plant and the controller model. This package, indeed, forced the system to work in an optimum area instead of optimum setpoint. In this way, the performances of the plants aren’t compromised. The model, also, is implemented by using historical data of the process and adjusting online the parameters with an adaptive model, saving time.

SMOChas been used in more than 430 applications such as crude distillation, hydrocracking, styrene etc.

In the era of digital devices, “smart control” for chemical and petrochemical industry can have a key role in reducing costs, saving materials and increasing production rates. The idea is to create intelligent networks where flowsheet and variables are optimized in real time.[30] Emerson represents the leading company in the sector providing smart solutions both for old and new refinery such as electronic marshalling and HART (Highway Automated Remote Transducer) protocol. The former allows to eliminate cross-wires, to reduce the space occupied and the time for add new I/O interfaces[31]; the HART protocol, instead, matches the characteristics of analog and control system removing repetitive problem and predicting unexpected failures.[32] Several companies have implemented smart controls such as Chevron/PDVSA in Petropiar refinery saving 70 M$ in two years, reducing by 40% cost for pre-commissioning and commissioning, and 60% the losses due to instruments faults.[33] In China, Sinopec launched four pilot plants (Jiujiang, Zhenhai, Maoming, and Yanshan) using advanced control and online optimization. This allowed to increase profits of about 10% (i.e. at Yanshan and at Maomingprofits increased of 25.12 million of CNY and 41.94 million of CNY respectively).30

Process Control is very common in refineries and chemical plants. It was used for the first time in 1920-1930s and today is essential to respect product quality, safety and reliability of the processes. Despite the progress of technologies, 85-95% of feedback control loops are based on PID controllers and the main system controls are dated in 1985. The value of technologies that has reached the end-life and with more than 20 years is about 65US$ billion dollars and 53 US$ billion dollars respectively.33 Therefore, several tuning optimizations such as Artificial Intelligent Methods (Genetic and Differential Evolution Algorithms) together with Advanced Process Control (APC) have been described. Furthermore, some examples of the advantages offered by the implementation of APC have been shown and the latest software for Model Predictive Control (MPC) have been illustrated such as DMCplus, SMOC and RMPCT. In this scenario the “smart control” in chemical and petrochemical plants can have a pivotal role in reducing costs increase profits and create safer plants.  The current estimate provides that plant’s profit margin can improve of about 10-20% while emissions can decrease of about 70%.