By this way, CO2 is not more considered a problem or a waste to be treated with a significant economic impact, but a key valuable element to be used for the sustainable future of chemical industry.

Carbon dioxide has already its market, since it is used as blanketing agent, fire extinguisher, drying ice, refrigerating fluid, aerosol propellant, shielding gas in welding, for carbonation of beverages, etc. But, new processes are going to be developed for the massive use of CO2 as reactant or feedstock in crucial industrial sectors. Among the different application of CO2 for chemical processes, the following classification can be made:

In the following, some of the most interesting technologies developed are reported and described.

2.1 Dry reforming of methane for the production of synthetic fuels

The dry reforming is a reaction through which the carbon dioxide reacts with a methane stream to produce the syngas, a mixture of carbon monoxide and hydrogen:

Many studies are reported on this syngas production process [3], mainly about the development of proper catalysts. The most interesting application is with the biogas derived from biological processes as anaerobic digestion or gasification, which is typical composed by methane and carbon dioxide and can be fed directly to the dry reforming reactor. But, methane dry reforming can be also applied by adding to a methane flow the CO2 stream captured from thermoelectrical energy production processes.

2.2 Production of methane from CO2

The reduction of CO2 with hydrogen for the production of methane is a process that attracted interest since the beginning of the last century. The first scientist who studied the reaction was Sabatier, which discovered that one mole of methane can be obtained by the reaction of one mole of carbon dioxide and four moles of hydrogen, according to:

CO2 can be generated from the combustion of coal or biomass. The CO2 based methanation interest is increasing mainly in countries with large coal resources, as U.S., China and India. The synthetic methane produced can be distributed in natural gas pipeline and can feed the natural gas internal combustion engine for the automotive sector or can be used in boilers for domestic heating.

Other pilot plants are under development [5], mainly in the U.S. (Taylorville, Kentucky, Lake Charles) and China (Shenhua, Huayin, Hexigten Qi).

Methanol is a compound used as feedstock for hundreds of chemical products. Moreover, in the last years, methanol has been considered as a potential energy vector to be applied as a fuel in the transportation sector or as a feedstock for electricity production through DMFC [6] (Direct Methanol Fuel Cell).

Traditionally, methanol derives from the syngas, produced from fossil fuels as coal or natural gas. But interesting processes able to synthesize methanol directly from CO2 are under development.

The basis of these processes is the reverse Water Gas Shift reaction [7], by which carbon monoxide (CO) can be produced by converting CO2:

Then, carbon monoxide can react with hydrogen to produce methanol:

If the hydrogen is produced by means of an electrolysis unit, the global process can convert electricity in a liquid fuel as methanol, easily to be stored, distributed and used.

Biodiesel production from microalgae is one of the most promising solutions for the development of innovative and clean fuels.

The most interesting application of CO2 use for microalgae cultivation has been realized by Seambiotic (Israel) [10], which realized a pilot at the power plant of the Israeli Electric Corporation in Ashkelon of about 1.000 meter square of open ponds. 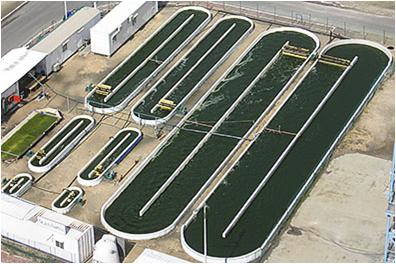 The Supercritical Fluid Extraction (SFE) process is a pre-industrial technology, already applied in some high added-value productions. The technology exploits the particular characteristics of supercritical fluids to extract components from solid matrices [11], [12]. Supercritical state is achieved when the temperature and the pressure are over the critical values, giving to the substance characteristics typical of both gases and liquids. Compared with the traditional extraction process with liquid solvents, supercritical fluids (SFs) have several benefits, as the capability to adjust the solvent density and, therefore, the extraction properties, the lower viscosity and higher diffusion, thus increasing the extraction rates, the easiness in separation of the supercritical fluid from the extracted compounds.

Among the supercritical fluids that can be applied, carbon dioxide is the most interesting for the low cost, the high availability and the low critical temperature (31°C at 73 bar).

Many applications of the CO2-SFE have been realized in the food processing [13]. 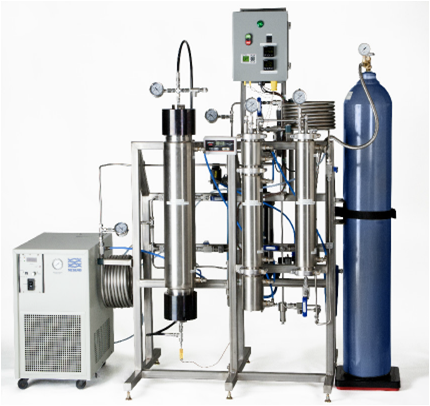