The rapid growth of the world population driven by the development of the industrial sector, have led to an increase of the anthropogenic greenhouse gas emissions. It has been detected an unprecedented, in at least the last 800,000 years, concentration of carbon dioxide (Figure 1‑1) in the atmosphere. Such event, together with other anthropogenic drivers, have been related as the main cause of the phenomena of the “global warming” observed since the mid-20th century.

In order to face the issue raised from the considerations about CO2 concentration, the first worldwide agreement on greenhouse gas emissions was signed in April 2016. The 196 countries responsible for 55% of total CO2 emissions agreed, at the Conference of the Parties in November 2015, to commit to cap global warming at a maximum 1.5°C (referred to the global land-ocean mean surface temperature, GMST), a more challenging target than the 2°C cap originally proposed in the Paris World Climate Conference. Given this commitment, signatory countries need to review their energy strategies in order to reduce emissions by actively promoting low carbon economy policies[2].

Natural gas is a fossil gas mixture consisting mainly of methane (C1). The remainder is heavier hydrocarbons: ethane (C2), propane (C3), isobutane (iC4), n-butane (nC4), and small amounts of heavier components down to C7s. The typical values of the percentage of methane mole fraction in natural gas may vary from 87% up to 97%[3].

Among all the fossil primary energy sources, natural gas presents the highest hydrogen to carbon ration. This characteristic is of extreme importance since leads the following two main properties: 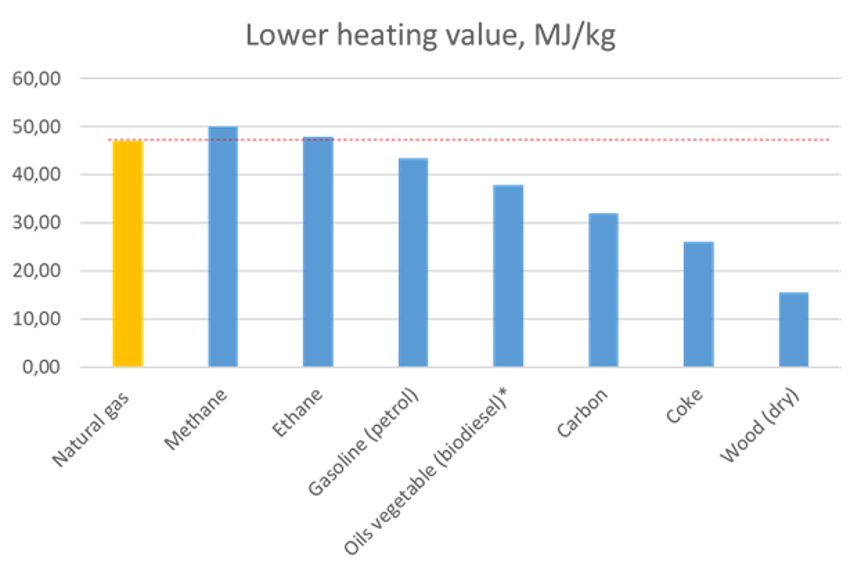 According to the proprieties described above, natural gas plays a fundamental role in the fight against climate change. The substitution of high carbon content fossil fuels, such as coal, with natural gas, may represent the first step forward the decrease of CO2 emissions.

The main sectors that will immediately benefit of replacing low hydrogen to carbon fuel with methane in terms of CO2 emissions are:

It is clear that the substitution of “conventional” fuel with methane is just a temporary solution, a clever way to “take time” establishing a transition phase, until the worldwide development of the zero-emission (renewable) energy sources will take place.