Energy recovery and process integration is the most direct solution if for the increasing of process efficiency. In the industrial processes (in in particular in the chemical and petrochemical sector) the performance improvement is mandatory in order to face the climate change as well as the growing energy crisis. This objective can be achieved by integrating systems for the simultaneous minimization of the objective functions: the investment cost and the energy consumption.

By analysing the heat transfer, the optimal system is the one that balances the two abovementioned functions by identifying the most convenient way to transfer the heat between various fluids in the overall system (in a way compatible with the process control constraints, the need of spaces and the safety risks)[1]. This aspect is complex by its nature since the chances of interconnection in a plant configuration vary with the operating conditions. A systematic approach to this issue is given by Nishida and co-workers[2] that individuated from the theoretical point of view the two main areas of the process integration: the identification of the different possible alternatives and the development of heuristic criteria to discard the worst solutions. The Pinch Analysis (PA) was born from these necessities by some academic works as the one developed in the ETH of Zurich and Leeds University in the 70s[3]. The first systemic essay on the pinch technology was given by Linnhoff[4]. He applied thermodynamic fundamentals for improving the process efficiency, saving energy, reducing the investment cost and optimizing the process control. By analysing the heat flow cascade, Linnhoff defined the pinch point as the temperature level corresponding to a zero heat flux between the hot and cold fluid (Fig. 1) and proposed the graphical approach based on the Grand Composite Curve in order to simply evaluate the pinch and the energy target[5]. His works become the main textbooks on pinch analysis. He also established the Linnhoff March Ltd in 1983 offering process design services to international clients; in 90’ around 80% of all the world’s largest oil and petrochemical companies become its clients or sponsors. The expanded edition of 2006, “Pinch Analysis and Process Integration” is the fundamental book of modern PA[6]. These methods are now recognized also as fundamental for pollution prevention in the view of reusing and reducing the resources as well as optimizing end-of-pipe treatment and disposal[7].

Intuitively, the main field of application of PA is the optimization of Heat Exchanger Networks (HEN) present in complex systems. The concept, based on the thermodynamic analysis, do not use advanced unit operations for the performance 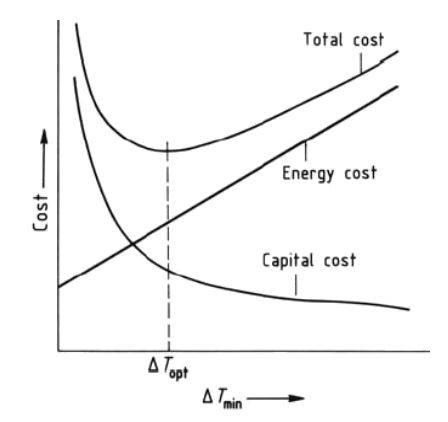 improvement, but has the aim to match the cold and hot process streams with a HEN that minimize the external energy supply. According to the PA fundamentals, the first step is to draw the heating and cooling curves to evaluate the minimum temperature difference ΔTmin and the related energy target corresponding to reasonable values of the temperature differences.

The interval temperatures are used to compose a Grand Composite Curve (GCC) that gives the overall process overview in the temperature and heat flow diagram (Fig. 1). The smaller  ∆Tmin the  more  heat  can  be transferred in the heat exchanger, but this will also lead to larger heat exchanger area which is costly. Hence, choosing an optimal ∆Tmin is possible only by integrating economic considerations.

The diagram is commonly divided into two sub problems defined by the pinch points (i.e. the constrained regions in which there is the minimum temperature difference between the streams). This approach has two main corollaries: do not transfer heat across the pinch; do not use external cooling above the pinch and external heating below the pinch[8] (as visible in Fig. 2).

Globally, the application of Pinch analysis in the process industry is necessary for large, complex industrial facilities, where systematic methods are needed to identify the best opportunities to improve energy efficiency. The typical PA project is based on the fundamental stage of data acquisition (primarily heat loads and temperatures and economic parameters) regarding the process under consideration. Then, the analysis can be directed to:

This latest aspect can be characterized as the Mass Pinch analysis, developed by Mahmoud M. El-Halwagi, and Vasilios Manousiouthakis[9], consisting in a thermodynamic procedure used to identify the bottlenecks that limit the extent of mass exchange between the rich and the lean process streams (in order to improve the design and minimizing the cost). 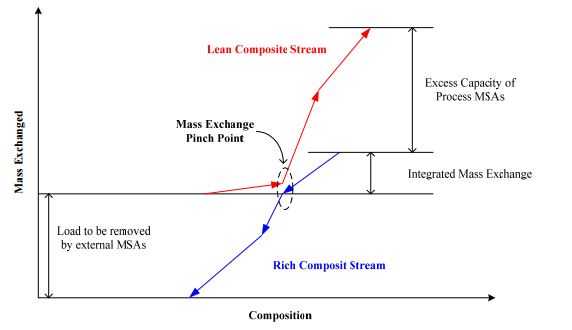 Since the Oil & Gas Sector is one of the major energy user and supplier, is highly integrated from the point of view of heating and cooling power and it is, therefore, the optimal candidate for PA.

The group of the Politecnico of Milano developed many strategies based on the PA for the optimal design of steam generators, boilers and heat recovery steam cycles. Their “HRSC Optimizer” has been applied with interesting results on Fischer Tropsch (FT) synthesis processes[10]  (with high recovery of the unconverted gases) as well as integrated gasification combined cycle (IGCC-CCS). Joe and Rabiu improved the existing HEN of a Petroleum refining section revealing a 34% of energy saving by the definition of the optimal utility usage, number and surfaces of the exchangers[11]. Yoon et al., suggested the retrofit of a ethyl benzene plant by PA with a payback time of less than one year and by reducing the opex of more than 5%[12]. The application of PA in the retrofit design of the Tula distillation units is described by Briones in 1999 on the Oil&Gas Journal. The reduction of the fuel consumption by more than 40% (8 M$/year) with a payback period of less than 2 years are among the main claimed results[13]. An integrated design of the atmospheric and vacuum distillation units exploited opportunities for heat recovery and removed inefficiencies such as the use of stripping steam instead of reboilers, the use of heat sources (for example, vacuum residue and pump-arounds), the cogeneration in the steam and power plant.

A. Posada and V. Manousiouthakis[14] studied the methane reforming based hydrogen production plant with the purpose of finding minimum utility cost (hot, cold and electricity). Keshavarzian et al., described the PA of the para-xylene separation unit of Borzouyeh Petrochemical Company[15]. Rossiter reported a detailed example of PA in crude distillation unit. After data acquisition, individuation of the energy target and the major inefficiencies, he individuated the main opportunities for retrofit desig: i) to rearrange existing heat exchangers to increase feed preheating and/or steam generation; ii) to add heat transfer area to existing matches between hot and cold streams; iii) to add new exchanger to introduce new matches between the streams8. His retrofit design reached the recovery of 45% of the energy target (14 MBtu/h in the crude preheating and 12.2 MBtu/h for steam generation at 120 psig) with a net saving of more than 2.5 M$ and a payback period of about 3 years. Shahani et al.[16] have suggested alternative design of hydrogen plants seen as a source of steam from waste heat recovery (apart from the primary purpose of producing hydrogen) because of the potentiality of the steam reforming to produce steam more efficiently than a conventional boiler. Further industrial case studies are reported on the IPIECA website[17].

For very large problems such as refining industries, mass and energy integration is necessary for reaching the best economic option. In similarity with the Heat exchange network, any synthesis process can be seen as the interconnection of different Mass Exchangers[18]. 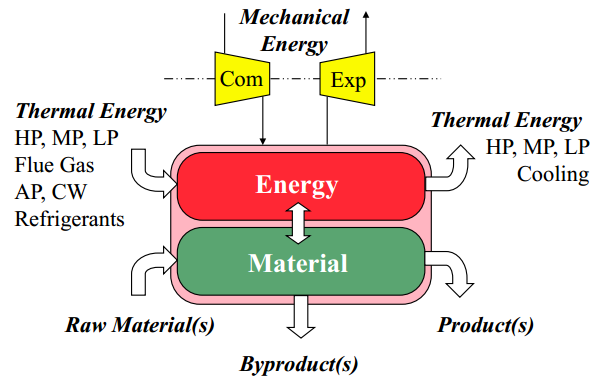 This broader vision derives from the concept of seeing a process as a converter of energy (degradation) and matter (separation). This systemic approach is typical of chemical engineering and process engineering that see any complex system as an integration of unit processes. This representation has been intuitively depicted by T. Gundersen in 2013[19] at the International Process Integration Jubilee Conference.

Examples of water and hydrogen PA in the oil & gas sector can be found[20] for the Energy Recovery at a Fluid Catalytic Cracking (FCC) Unit[21]. Rajesh et al.[22] have presented an integrated approach to obtain possible sets of steady state operating conditions for improved performance of an existing plant, using an adaptation of a genetic algorithm that seeks simultaneous maximization of product hydrogen and export steam flow rates. The hydrogen PA in a petroleum refinery has been presented by M.K. Oduola and T.B. Oguntola that evaluated that  the  hydrogen margin between source and sink units has drastically reduced to about 17kNm3/h (~ 63% of reduction).[23] Nelson and Liu[24] created an automated pinch spreadsheet for the quick evaluation of hydrogen excess and the possible saving in the networks through the evaluation of sources and sinks by the Property Cascade Analysis (PCA) to establish the resource targets within a property integration framework. The fundamentals and the mathematical algorithms for wastewater minimization by PA can be found in the work of Wang and Smith[25].

Nevertheless, it is important to note that, if not bound properly and conducted by expert evaluators, the pinch analysis can lead to risky solutions or, simply, virtual solutions being not compatible with the system in which fall. The design must be therefore in depth examined by external expert auditors (in particular through the hazard analysis).

[5] IChemE User Guide on Process Integration for the Efficient Use of Energy, 1st edition, in 1982

[14] A. Posada and V. Manousiouthakis. Heat and Power Integration Opportunities in Methane Reforming based Hydrogen Production with PSA separation

[21] Natural Resourches Canada:  PINCH ANALYSIS: For the Efficient Use of Energy, Water & Hydrogen Her Majesty the Queen in Right of Canada, 2012