At the present, the worldwide demand of ethylene/propylene is more than 200 million tons per year but the conventional processes suffer for a series of problems as the high cost and low conversion efficiency.

In the following, the traditional technologies, i.e. the Thermal Steam Cracking and the Fluid Catalytic Cracking, are firstly presented. Then the innovation in the olefins production are described and assessed.

The most used olefins industrial production processes are:

Then the products (ethylene, propylene, butadiene, hydrogen) are quickly cooled down to avoid subsequent reactions (quenching) and then are separated by means of a series of operations (refer to Figure 1).

TSC is an energy intensive process: the specific energy consumption per kg of produced olefin is 3.050 kcal/kg.

FCC is a multi-component catalytic system, where the catalyst pellets are “fluidized” thanks to the inlet steam flow-rate and the cracking process is supported at lower temperature than TSC. A typical block diagram is shown in Figure 2, while a FCC reactor drawing is reported in Figure 3.

As a consequence, a strong interest towards the development of more flexible, more efficient with a lower environmental impact and less expensive catalytic olefin production technologies is growing.

In the following, some of the most interesting technologies developed during the last years are presented and described. 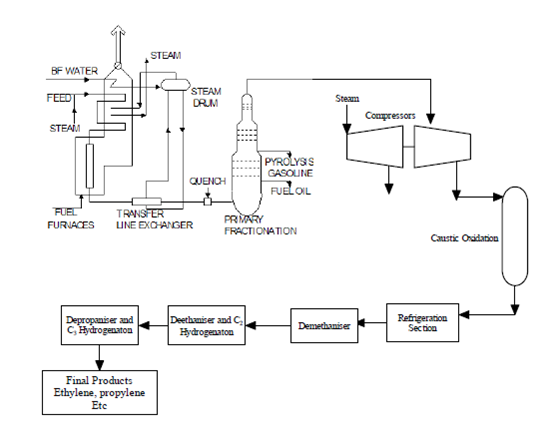 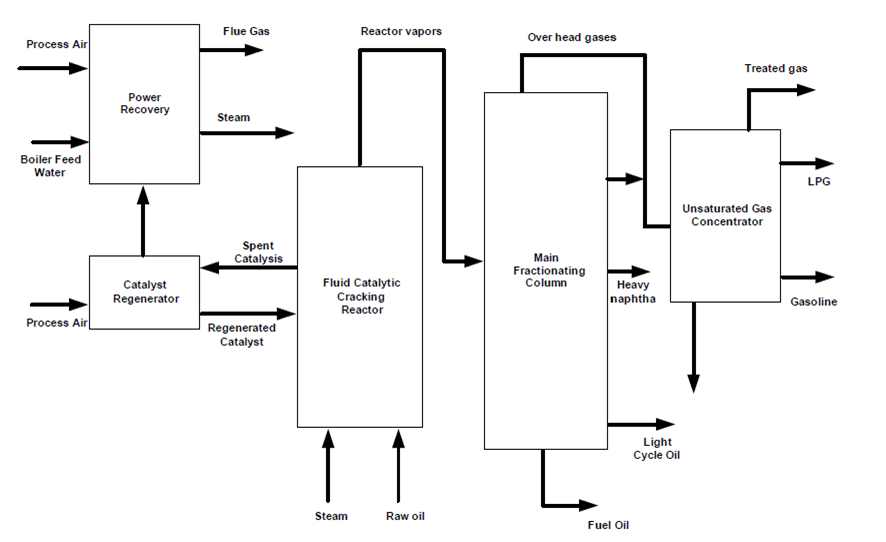 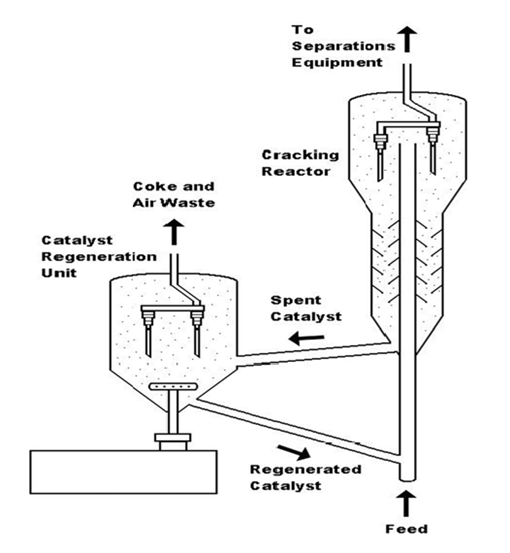 The Advanced Catalytic Olefins (ACOTM) technology has been developed by Kellogg Brown & Root LLC (KBR) and SK Innovation Global Technology. The process is an FCC-type with an improved catalyst able to convert the feedstock in larger quantities of ethylene and propylene, with a higher share of propylene than conventional processes (the ratio of produced propylene to produced ethylene is 1 versus 0.7 of the commercial processes). The ACO process produces 10-25% more olefins than the traditional FCC processes, with a reduction of consumed energy per unit of olefins by 7-10% [3].

The plant configuration is composed of 4 sections: riser/reactor, disengager, stripper and regenerator. Figure 4 shows a simplified process scheme, while Figure 5 illustrates a picture of the first ACO commercial demonstration unit, installed in South Korea and with a production capacity of 40 kta of olefins. 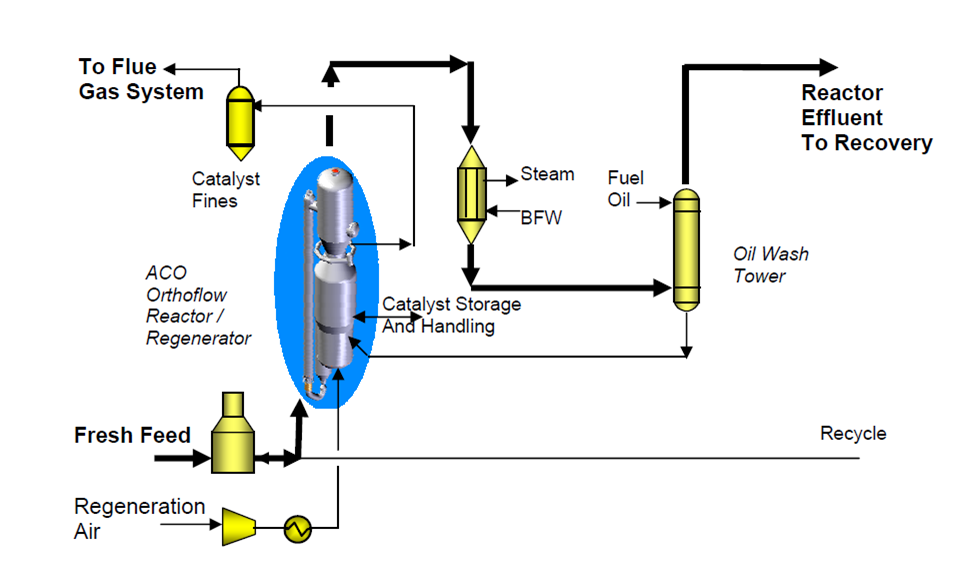 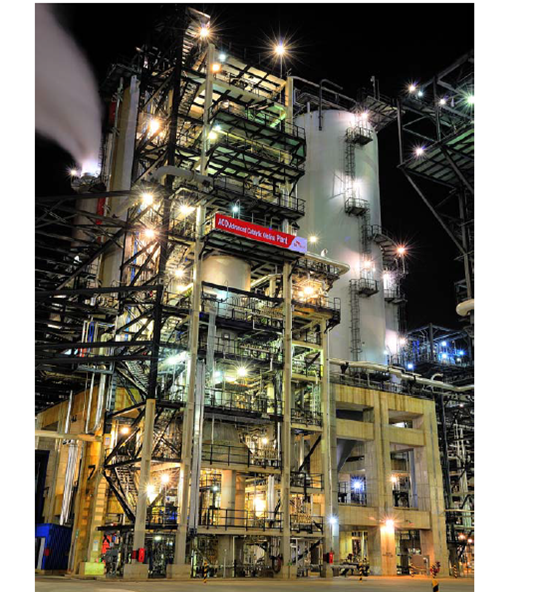 The Propylene Catalytic Cracking is a fluid solids naphtha cracking process patented by Exxon Mobil and based on an optimization of catalyst, reactor design and operating conditions set able to modulate the reactions selectivity, leading to crucial economic benefits in comparison with the conventional processes.

The PCC process is able to produce directly the propylene at the chemical grade concentrations, thus avoiding the expensive fractionation units. Moreover, the specific operating conditions allows the minimization of aromatics production [4].

Exxon is testing the innovative solutions on tailored pilot facilities.

The Indmax process, developed by the Indian Oil Corporation, is able to convert heavy feedstock to light olefins. It is a FCC-type process where the reactions are supported by a patented catalyst, able to reduce the contact time and thus leading to higher selectivity to light olefins (ethylene and propylene).

Another crucial characteristic of I-FCC process is the high production flexibility: the process can be easily adjusted to modulate the output, maximizing propylene, gasoline or producing combinations (propylene and ethylene or propylene and gasoline) [5].

Moreover, the CO2 and CO streams are captured at the outlet of the catalytic process and utilized for producing chemicals and polymer, thus nullifying the GreenHouse Gases emissions.

The production volumes foreseen for the innovative process are 224 ktons of ethylene, 112 ktons of acetic acid, 30 ktons of CO2 and 15 ktons of CO.

Many research efforts are devoted to find new routes and process configurations to convert directly natural gas to olefins by low temperature reactors.

Even if the direct route seems to be more interesting, at the present not a good light olefins selectivity has been obtained [7] and the MTO processes are more energy intensive than the conventional cracking technologies. The only pre-commercial scale application has been developed by UOP and Total Petrochemicals in Feluy (Belgium): the plan is an indirect process able to produce ethylene and propylene through methanol and syngas. 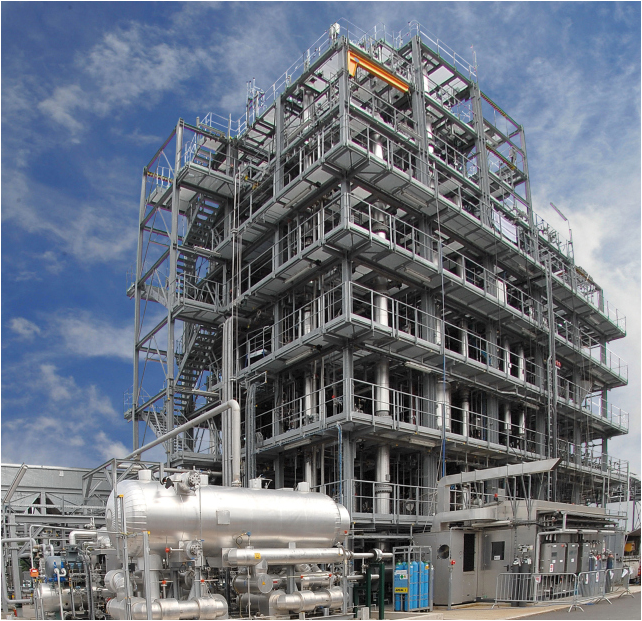 The company UOP developed an innovative Propane Dehydrogenation (PDH) process able to produce ethylene and propylene at lower cost thanks to a lower energy usage and a more stable platinum-based catalyst [15]. The process, called Oleflex, is divided in three sections: the reaction, consisting of four radial-flow reactors, the product purification and the catalyst regeneration. Fig. 7 shows a process layout. Currently, 6 Oleflex units are installed and produce more than 1.250.000 MTA of propylene worldwide. 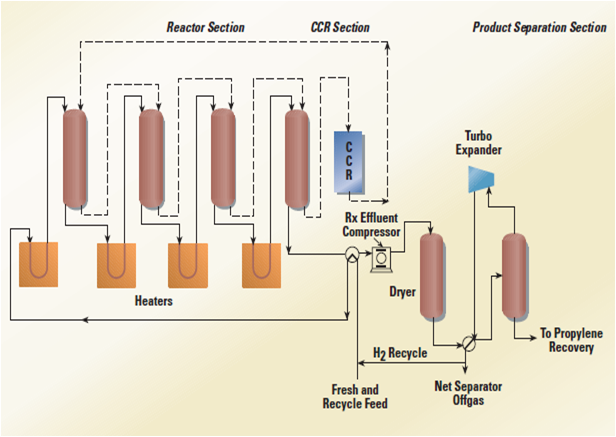 The Shell Higher Olefins Process (SHOP) is an innovative olefins production technology, developed by Royal Dutch Shell, based on a homogeneous catalyst and used for production of linear α – olefins (from C4 to C40) and internal olefins from ethene.

At the present, SHOP is widely applied and the worldwide production capacity is 1.190.000 t of linear alpha and internal olefins per year.

The process is supported by a patented monolithic catalyst able to improve the ethylene yield up to 55 wt.% [18].

At the present, the technology has been validated trough a bench-scale unit, by which the optimal operating conditions have been identified. However, the industrial scale application is not ready yet, since an optimization of the CPO reactor design and the improvement of the catalyst reliability are needed.