Highly polluted sites are present all over the world and particularly in countries that, in the last years, have seen uncontrolled and unplanned economic development. They are the result of earlier industrializationand poor environmental management practices that caused the alteration of groundwater and surface water, air quality, the hampering soil functions, and the polluting in general. In Europe there are about 500000 contaminated sites and two million of potentially contaminated sites. These are often made from the retired industrial, extractive and military activities[1].The U.S. Department of Energy (DOE) manages an inventory of sites including 6.5 trillion liters of contaminated groundwater (equal to about four times the daily U.S. water consumption) and 40 million cubic meters of soil and debris contaminated with radionuclides, metals, and organics. Some of the main contamination sources in this field are depicted in Figure 1[2].

Remediation represents the set of solutions such as the treatment, the containment or the removal/degradation of chemical substances or wastes so that they no longer represent an actual or potential risk to human health or the environment, taking into account the current and intended use of the site[3]. As described by EPA, any Remediation management plan considers complex systems involving different pollutants and polluted matrix and should include all the impacted environmental aspects such as air quality, noise, surface water, soil quality, ground water management, floraand fauna, heritage as well as social, structural and safer aspect. The dispersion of the Non Aqueous liquid phase (NAPL) in Figure 1 depends on the site geotechnical characteristics, the aquifer relative positions and the pollutant chemical properties. Sometimes the contamination sources succeeds in reaching the groundwater pollution, such as at solid waste landfills where chlorinated organic compounds reach the groundwater due to rainfall water leaching. 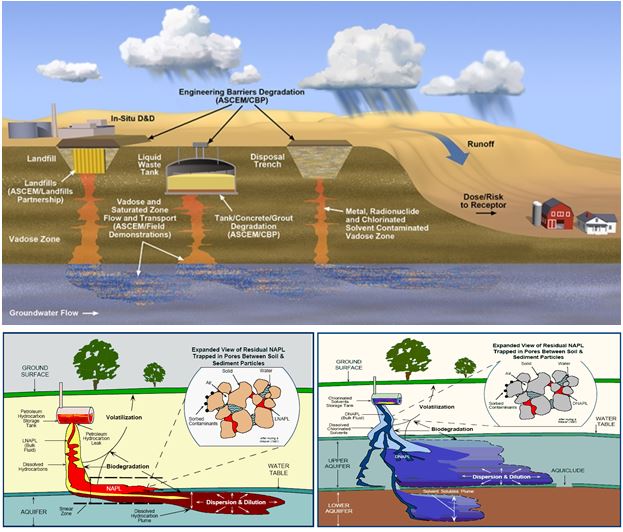 Typical pollutants in this sector are aromatic hydrocarbons, heavy metals, pesticides as well as biological contaminants. The choice of a contaminated soil remediation technology is based oneconomic factors, the site-specific characteristics and of the remediation goal.Remediation technologies can be realized both on-site and off-site and act mainlyby Transformation (degradation of complex organic compounds to simpler intermediate, possibly up to the full mineralization) and removal from the contaminated matrix, typically for heavy metals, already in elemental form, which cannotbe further degraded. When these techniques cannot be accomplished or are too risky and expensive, immobilizationordinary Portland cement (OPC), water glass (sodium silicate), gypsum or organic polymers, for example acrylic or epoxy resins, covering with bentonite or polymeric membrane are the available options to ensure the isolation of the polluted site to reduce the water infiltration and the possible mobilization and migration of the elements.In this brief review, it is complicated to clearly distinguish the methods according to the contaminated matrix (being a phenomenon often multi-matrix&multi-pollutant) and to the possibility of realizing them close to the site or far away in centralized systems.Therefore, thetreatment are presented in relation to the technological nature of the process (physical-chemical, thermic and biological), as listed in Table 1.

Due to the recalcitrant nature or the toxicity of the main pollutants,incompatible with biological systems, it is necessary to implement chemical methods to neutralize these substances: to convert into less harmful forms, less mobile, more stable and inert) the substances.Injection of chemical reductants, including calcium polysulphide, has been used to promote contaminant reduction and precipitation within aquifers. TheIn-situ Oxidation consists in injecting oxidants such as hydrogen peroxide (H2O2) into the contaminated aquifer. 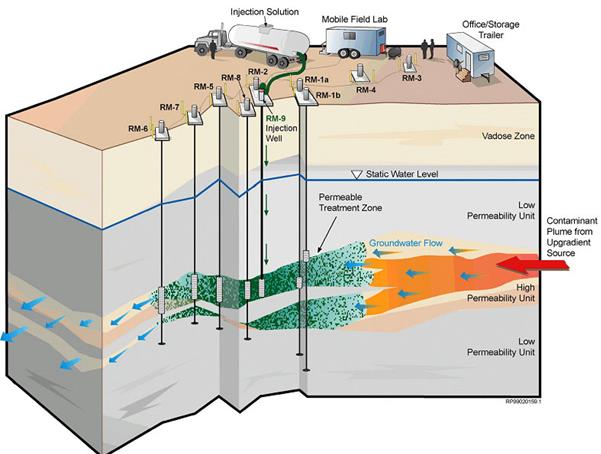 Contaminants that are well suited to remediation using this approach include metals with a lower solubility under reduced conditions (e.g. Cr (VI), through reduction to Cr(III) and precipitation of Cr(III) hydroxides). Advanced oxidation processes releasinghydroxyl radicals are the most affordable techniques to degrade organic recalcitrant pollutants. These include the use of H2O2, UV, O3, “Fenton reactants”, etc.

The physical treatments mainly consist in the separation of the pollutant.Alternatively, it is possible to isolate highly concentrated matrix to be eventually treated or sent to the final disposal. This solution avoids the addition of chemical reagents (and secondary pollutant formation) but should include costs for gas treating and for landfilling, especially for special waste.The air sparging is successfully applicable to volatile compounds (hydrocarbons and chlorinated solvents).Physical and geotechnicalcharacteristic of the soil as well as chemical properties of the pollutant are fundamental in the process analysis. The aquifer characteristic, if present, also influences the process. Natural zeolite has been studied extensively for remediation of heavy metal-polluted soils due to its wide availability and low cost.

The Pump-and-treatinvolves removing contaminated groundwater from strategically placed wells, treating the extracted water after it is on the surface to remove the contaminates using mechanical, chemical, or biological methods, and discharging the treated water to the subsurface, surface, or municipal sewer system. Water from the aquifer is pumped through the wells and piped to the pump-and-treat facilities, where contaminants are removed through an ion exchange that relies on tiny resin beads, resembling cornmeal, packed into large tanks or columns. As the water travels through the columns, hexavalent chromium ions cling to the resin beads and are removed from the water.[4]

Depending on the type of the reactive material and contaminants, the degradation may be complete ormay produces intermediates with different toxicity by the initial compounds.Therefore, very often the use of chemical-physical combined techniques (e.g. soil washing)could exploit the advantages of both.

While pump and treat of groundwater mainly include ex-situ treatments, Permeable Reactive Barriers (PRBs)can be used for the in-situ treatment of the waterscontaminated ground. As visible in Figure 4, a PRB consists of a continuous treatment zone, in its usual configuration, formed by the reactive material, installed in the subsoil in order to intercept the contaminated plume and induce the degradation of the contaminants from the mobile liquid phase.This technology is energy-saving since a reactive mediumwith a permeability higher than that of the surrounding soil has to be used[5],[6]. In this way, remediation occurs under the natural gradient of the aquifer, without additional energy contribution except the groundwater hydraulic head.PRBs are defined Permeable Adsorptive Barrier (PABs) when adsorbing material is used as reactive one and contaminant removal is carriedout by adsorption6. Recently, academic research is focusing on the investigation of innovative configurations, such as Discontinuous Permeable Adsorptive Barriers[7], which is arranged as a passive well array with one or more lines at a fixed distance one another and filled with adsorbing materials (Figure 5). Comparing Continuous and Discontinuous Adsorptive Barrier configurations it can be found that the decontamination of the same volume of groundwater can be carried out by reducing the amount of the barrier volume, and consequently by reducing remediation cost,if a Discontinuous barrier is used, highlighting the technology and cost-saving innovation of this advanced configuration[8]. 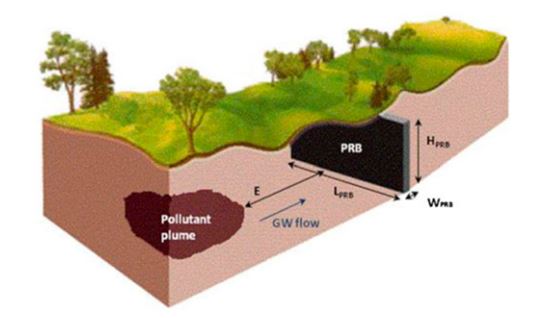 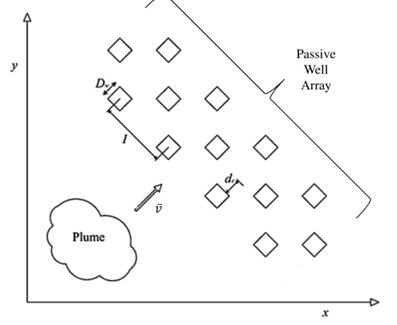 The biological remediation methods (BioSparging, Landfarming) are available for high permeable and homogeneous soils for the mineralization or conversion of organic contaminants (SVE, BV, BTEX, light hydrocarbons, non-chlorinated phenols) into less toxic forms, or more toxic but less bioavailable. This process primarily exploit the ability of microorganisms transform the polluting material part in the biomass and partly into less complex molecules (eventually to minerals, carbon dioxide and water). These processes have been tried to remove heavy metals from soil as well, using biological leaching (bioleaching) or redox reactions.These methods are also non-invasive and can bring potential beneficial effect on the structure and fertility of the soil.In addition to microorganisms, plants can accumulate and degrade the contaminants in the so-called phytoremediation process. This recovery method, called phytoremediation, takes advantage of the complex interaction between root system of plants, microorganisms and soil, and represent the most sustainable solution in this sector. A review is given by Puldorf and Watson[9].A typical plant may accumulate about 100 parts per million (ppm) zinc and 1 ppm cadmium. Thlaspi caerulescens (alpine pennycress, a small, weedy member of the broccoli and cabbage family) can accumulate up to 30,000 ppm zinc and 1,500 ppm cadmium in its shoots, while exhibiting few or no toxicity symptoms. A normal plant can be poisoned with as little as 1,000 ppm of zinc or 20 to 50 ppm of cadmium in its shoots[10]. Phytoremediation has also been studied for degrading PCBs and PCDD/Fs [11].Some disposal methods for phytoremediation crops were proposed by Sas-Nowosielska et al.[12].The most beneficiary is to use phytoextraction crops for energy production hence pyrolysis, gasification or combustion. The fate of trace elements during combustion, pyrolysis, fluidized bed and downdraft gasification were studied in the recent scientific literature[13].

TheThermal methodscan induce the separation of the pollutant meansdesorption / volatilization and its destruction or immobilization by fusion of the solid matrix. In the desorption of pollutants from contaminated soil, a major research effort has been initiated to characterize the rate-controlling processes associated with the evolution of hazardous materials from soils[14]. The P.O.N. Research Project DI.MO.D.I.[15] was focused on the treatment of soils contaminated by hydrocarbons by an innovative device that could represent the solution to many logistical problems that make difficult the “on-site” treatment. The device (sketched in Figure 6) developed consists ina mobile unit, installed on truck, completely self-sufficient, able to permit emergency safety and remediation in reasonable short times and low cost actions. The treatment unit utilizes a dual fluidized bed reactortechnology fed by the hot gas produced by a hot gas generator. The upper bed is aimed at soil drying while the lower bed is aimed at soil remediation by thermal desorption. The processes of soil draying anddesorption of volatile and semi-volatile organic contaminantsoccur by the direct contact air/solid particles promoted by the fluidization technology. The soil requires a pre-treatment based on shredding/pulverizing and dimension separation, in order to feed the soil with the optimal size for fluidization. Particle removal from desorption gaseous flow stream is carried out by dust separator units (fabric filter and cyclone). 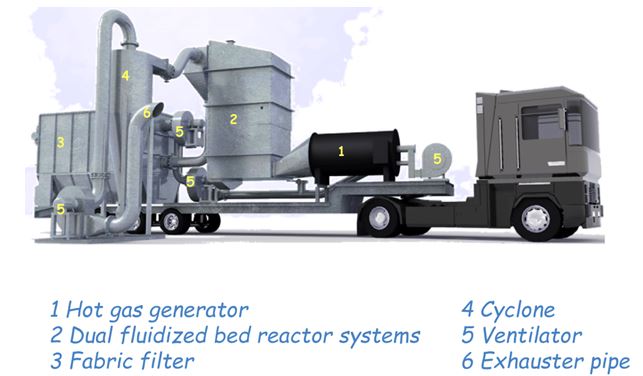 Figure 6 – Schematization of the DI.MO.D.I.treatment unit 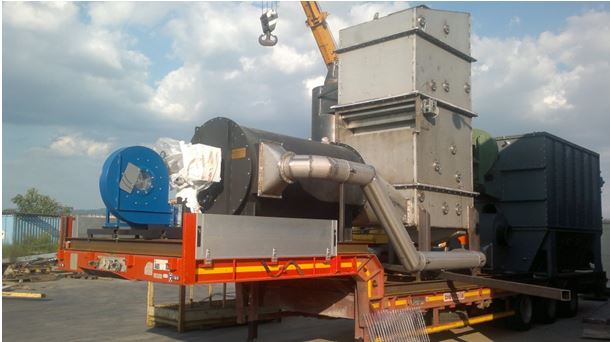 [10]From US Department of Agriculture Phytoremediation: Using Plants To Clean Up Soils