The presence of sulfur compounds in fuel oils causes concern both during refining processes (due to catalyst deactivation and corrosion) and during the fuel end-use, since the fuel combustion generates the emission of oxides. The main environmental concern from SOx emission is related to respiratory problems.Sulphur oxides (with water) also produces sulphuric acid, the main cause of acid rain and corrosion. Furthermore, when the emissions are in the form of sulphate particles, sulfur also contributes to the formation of particulate matter.

The original content in crude oils (organic in the form of thiols, sulphides, and thiophenic compounds and inorganic such as S, H2S, FeS2) varies from 10-2 to 8 %w (see Figure 1). Globally, the S amount in the distillation fractions increases with an increase in boiling range and the class of aromatics is the most resistant to desulfurization.

Among the 100 mb/day of oil supply, about the 4% is represented by the oil-based marine fuel. Shipping is by far the main pathway of international commerce and its emissions have a worldwide dispersion (also affecting climate)[1]. For decades, the ISO has been accepted the limit of 3.5% sulphur for the heavy bunker fuel. To lower the pollution near ports, many governing bodies have established Emission Control Areas (ECA) in which the maximum sulphur(in burned fuels) is limited. The allowable level in these region has been reduced from 1.5 % (2010) to the present 0.1%. On the other hand, the International Maritime Organization (IMO) has planned to lower the sulphur content to 0.5%w from the 2020. Many Chinese ports, including Shenzen and Shangai, are going to implement the IMO compliance of 0.5% sulphur limit. These regulations require a very deep desulfurization to meet the ultra-low sulfur diesel (ULSD)specifications(15 ppm).According to McKinsey & Co., the shipping industry will react by switching to a combination of marine gasoil and low-sulfur residuals […] generating, very attractive investment on sulfur removal technologies.>>[2] 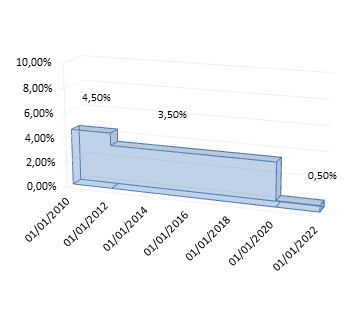 Foster Wheeler examined the impact of the new regulations on a typical refinery concluding that the new targets will be achieved by processing the crudes with the lowest S-content or by increasing the blending with distillates. From the market point of view, particularly if considering the SECA regulations, the distillate production will be under pressure and the new capital costs (upgrading/retrofit) will increase the price of bunker fuels up to the diesel level.[3]On the other hand, novel Desulfurization Projects (50-100 in the next 12 years) will be needed to produce ~200·106 tonnes/year of residue meeting the future specifications. In synthesis, the options available to meet the future environmental standards are:

It is the most common technique, already implemented in any refinery system, and needs hydrogen as a reactant and a catalyst (typically Co-Mo/Al2O3 and Ni-Mo/Al2O3) to convert sulfur compounds into H2S. Typical operating conditions are high temperature (>300) and pressures (>100 bar). Heterocyclic compounds are hardly removed (due to steric-hindered adsorption on catalyst surface) while thiols and sulfides are completely converted into H2S. This latter is subsequently separated from fuel oil sand oxidized into elemental sulfur (Claus Process). HDS can be applied to different streams of the overall refining process: i) Pre-upgrading (e.g. VGO hydro treating); ii) Residue upgrading gas well as iii) Whole Crude hydrotreatment generating directly low-sulphur crudes. These solutions are discussed in the report by Foster & Wheeler that also points out the increase in carbon emission related to the new refinery configurations able to meet these standards[4].

The overall effectiveness of HDS is limited by: i) metal content of heavy oils; ii) coking and fouling potential; iii) steric hindrance, during both the catalytic reaction and the adsorption.[5]In conclusion, to push forward the HDS in order to meet standards of ULSD means: high pressure and temperature (requiring high capital and operating costs), limited catalyst life and high energy and carbon footprint. 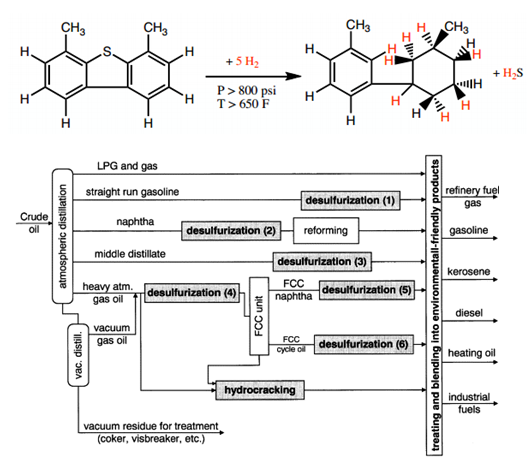 Figure 3- Possible locations of hydrotreating units in the oil refinery

This process, consisting in confining S-compounds onto a solid matrix, depends on the selectivity of the sorbent as well as on the regeneration method. Several sorbent materials have been evaluated for both model oils and distillates: activated carbon, silica-aluminas, zeolites, Gallium+Y-zeolites, Cu-zirconia and metal organic framework[6]. Acceptable desulfurization levels can be achieved under mild conditions from the experimental point of view. On the other hand, the process reliability is still not sufficient for industrial applications. Moreover, heavy oils present large molecules that strongly reduce the adsorption efficiency due to steric hindrance.

This process does not require hydrogen and external energy since it implements microorganisms to remove S atoms from organic compounds. It is still not practicable on industrial scale. Some experimental evidences have been presented in the literature for model matrix6.

Extractive desulfurization does not require hydrogen and can be operated at mild conditions. On the other hand, the system thermodynamics influences the process efficiency since i) the solubility of the compounds in the solvent (acetone, ethanol, polyethylene glycols, etc.) limits the extraction yield, ii) the solvent and the oil should be immiscible to minimize the solvent losses; iii) the viscosity of fluids worsen the mixing, iv) the vapor pressure of the solvent limits the operating conditions; v) the solvent may contain other compounds extracted from the oil. Because of these drawbacks the energy footprint of the solvent regeneration could be very high.

ODS is a viable alternative to HDS since oxidized sulfur compounds can be “easily” removed. The subsequent separation can be achieved by physical methods (e.g. extraction by non-miscible polar solvent followed by gravity, adsorption or centrifugal separation); oxidized sulfur can be also removed by thermal decomposition. Follow by EDS, the oxidation does not mitigate the solvent loss and energy cost (abovementioned solvent regenerating issues) but increases the process selectivity.

The process require oxidant (H2O2 among the best, other represented in the figure below) a catalyst (e.g. acids) and a phase-transfer agent (PTA) when the mass transfer across the aqueous and oil phases represents the rate-limiting step (to enhance the kinetics of the liquid-liquid heterogeneous reaction system). 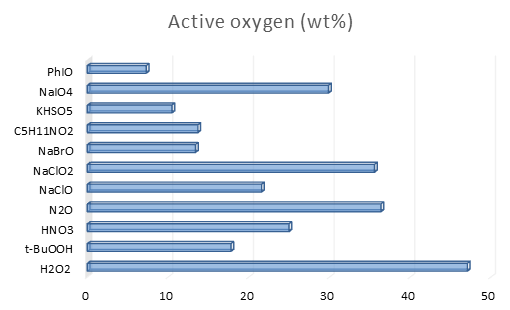 In factPTAs is able to form a complex with the oxidant in the aqueous phase transporting it across the interface. In synthesis, ODS can be obtained i) in an acidic medium, ii) by an oxidizing agent, iii) by autoxidation, iv) by catalytic oxidation, v) by photochemical oxidation, vii) by ultrasound oxidation.

Several companies and research groups introduced the intensification effect by means of Ultrasounds (US). SulphCo’s patented technology uses Ultrasound to induce cavitation in a water/oil stream[7]. During the Ultrasonic Cavitation (under the influence of the pressure rarefaction), cavities arise from dissolved gases by partial vaporization. Depending on the size of these cavities and the pressure variations, they undergo into a radial motion: the negative pressure induces expansion of the cavity until the attainment of a maximum radius. These vapor bubbles undergo a subsequent compression phase causing the rapid compression. The collapse dynamic is faster than mass and heat transfer (the temperature increasing is comparable with an adiabatic compression with heating rates > 109 K s-1) and leads to high pressures ( >100 bar) and temperatures ( > 5000 K ).;

where Ta is the ambient temperature, Pi is the pressure inside the bubble at its maximum size and Pa  is the ambient pressure at the moment of transient collapse. Thanks to these local extreme conditions, the collapsing cavity becomes an “hot spot”, concentrating the energy in very small zones. At the final moment of bubble collapse, wall motion is far more rapid than diffusion dynamics of water vapor: the entrapped molecules dissociates forming radical species. 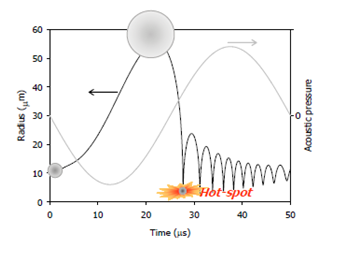 SulphCO® Technology demonstrated the efficient conversion of sulfides and other S species to sulfones (easily removed by downstream separation). Several research groups have tested the US to globally overcome the mass transfer limits and increase the reaction kinetics. Akbari et al. investigated the intensification effect that US produces on the efficiency and the catalyst deactivation during the oxidative desulfurization of model diesel over MoO3/Al2O3.[9]Bolla et al. studied the phenomenology of US-assisted ODS of Liquid Fuels by simulating the bubble dynamics, the involved chemical reactions as well as by observing the combination of oxidizing agents (e.g. Fenton reagent) and ultrasounds[10].Bhasarkar et al. investigated the contemporary use of ultrasound and PTA for ODS. Good conversion has been observed in the simultaneous desulfurization/denitrification of liquid fuels in sonochemical flow-reactors[11]. Different improvements achieved by the US implementation in industrial desulfurization processes are described by Wu and Ondruschka 2010[12].

Ionic liquids (ILs)have been implemented for their extraction characteristics in combined EDS/ODS schemes (see Figure 6). ILs consist of organic cations and inorganic anions; they are high boiling solvents and can be tuned to meet the requirement of specific applications. Low viscosity ILs showed remarkable results for their regeneration (by a simple water dilution and vacuum distillation process).[13]

The process efficiency increases with oxidized compounds (sulfoxides and sulfones) but ILS are also able to obtain good removal of heterocyclic S-compounds. The possible reaction patterns, regeneration features as well as future challenges and perspectives have been described by Bhutto et al.[14] 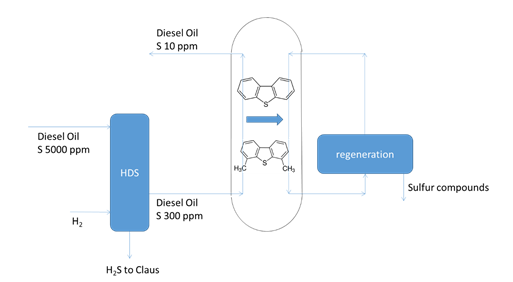 [12]Z. Wu, B. Ondruschka.Ultrasound-assisted oxidative desulfurization of liquid fuels and its industrial application