The Enriched Methane (EM) is a blend composed by Hydrogen and Methane which can be fed, if the H2 content is lower than 30% vol., into conventional natural gas internal combustion engines with a series of benefits in terms of [1] [2], [3], [4] :

The EM can be distributed in the low-medium natural gas grid (if the hydrogen composition is lower than 20% vol. [5] )and stored by using conventional methane storage system, thus its application being competitive using available and low cost infrastructures. Moreover, since hydrogen has the highest mass lower heating value (kJ/kg), the blend’s heating value is greater than those of the methane itself, thus enriching the energy contents.

Basically, if H2 is produced by exploiting a renewable energy source (solar, wind, biomass), the EM is a sort of a hybrid energy vector (fossil + renewable) with a immediate and competitive potentiality to be applied and a reduced environmental impact due to the strong reduction of CO2 emissions (up to 11% wt. if a blend of 30% vol H2 is burned).

In the present article, the main routes to produce EM blends are investigated both from fossil fuel and from renewable energies. Then, some applications implemented worldwide are presented.

Natural gas steam reforming is the most used process for the massive production of hydrogen. The process is composed by the following reactions:

and it is strongly endothermic, thus requiring high temperature to achieve high conversion of methane (90% at 850-950°C). In the conventional process, the reactions occur in tubular catalytic reactors placed inside furnace where a share of natural gas (30% approx) is burned to supply the reactions heat duty. But, if a EM stream has to be produced, much lower methane conversion (< 20%) and, consequently, lower operating temperatures (450-500°C) are required to reach the hydrogen content specifics. The main consequence is that the lower thermal level can be targeted concentrating solar radiation by well-know technologies as the Concentrating Solar Power (CSP) developed by ENEA, able to heat up a molten salt stream up to 550°C, reaching a thermal level suitable for the process requirements [6]. By this way, the hydrogen is produced exploiting a renewable source, improving the environmental footprint. The following figure shows a conceptual block scheme of the technology: after the low temperature reforming, a water gas shift reactor is installed to allow the conversion of CO into H2 and CO2; then the unreacted steam water is removed by condensation and the CO2 by an ammine-based absorption, while the EM stream is sent to the application.

A variation of the process is the Partial Oxidation Methane Reforming, where the heat duty is supplied thanks to the combustion of a share of input methane directly inside the adiabatic reactor. By this way, the energy needed to produce the hydrogen is fed by a fossil source.

Another process is the coal gasification, able to produce syngas (a mixture of methane, carbon monoxide, hydrogen, carbon dioxide and water vapor) from coal and water, air and/or oxygen. After the gasification reactor, a proper purification system allows to obtain a EM stream with the desired H2 composition.

Hydrogen can be produced from electricity by means of electrolyzers [7], which are able to dissociate the water molecule into hydrogen and oxygen. The electricity can be produced by renewable power plants as solar photovoltaic, wind farms, hydroelectric plants, etc., so that the hydrogen produced is completely CO2-free. Then, mixing the hydrogen with a methane stream, the EM blend is obtained and can be distributed by means of the natural gas grid. The following figure shows the renewable EM plant configuration.

By this architecture, it is possible to convert renewable electricity surplus into a high-added value product as EM, mitigating the intermittent nature of the renewable energy and avoiding overloading of the electricity network.

The biological hydrogen production by photosynthetic bacteria, algae or fermentative microorganism appears to be a promising alternative to produce EM.

To produce EM, a two-phase processes has to be implemented, by which an appropriate separation of acidogenic and methanogenic phases allows to convert the complex organic material into hydrogen, carbon dioxide and volatile fatty acids during the first stage, and then a conversion of these biodegradable compounds into methane and carbon dioxide during the methanogenic stage.

Moreover, processes able to convert a biomass (solid or liquid) into syngas (CO + H2), as the gasification, can be applied to produce EM. The gasificator can be coupled with a water gas shift reactor where the following reaction is promoted:

producing hydrogen from carbon monoxide. Then, the hydrogen is purified from CO2 and the trace of CO, mixed with methane and used.

Some EM pilot applications have been implemented worldwide. Among them, the following have to be cited: 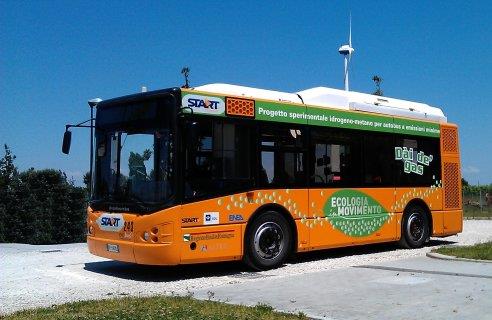 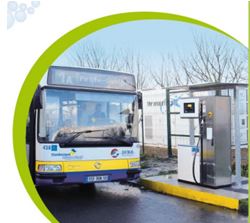 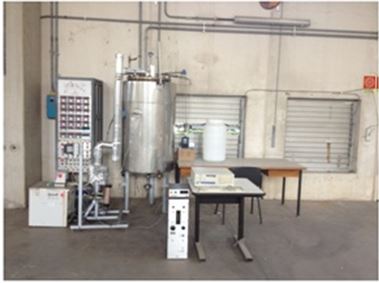 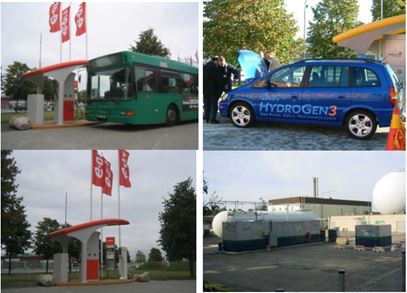 [5] Haeseldonckx D, D’haeseleer W. The use of natural-gas pipeline infrastructure for hydrogen transport in a changing market structure. International Journal of Hydrogen Energy 2007;32:1381–6.